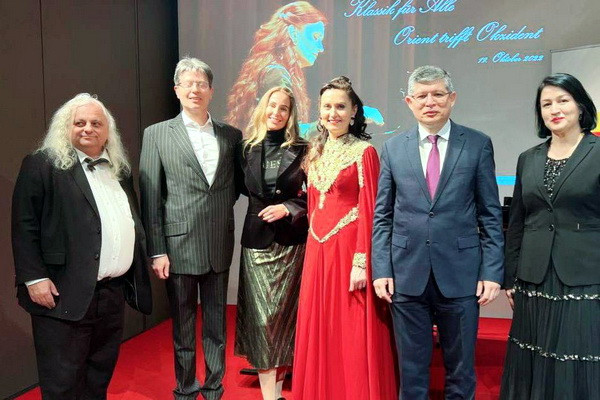 The culture of Uzbekistan was presented in Liechtenstein

The culture of Uzbekistan was presented in Liechtenstein

At this event, the executive director of the Yuzuk e.V. Dilbar Gafforova made a presentation on the topic "Fine Arts of Uzbekistan", as well as such topics as the ancient history of Uzbekistan, the Great Silk Road, ethnographic culture, which aroused great interest among the guests.

The main message was the idea that the fine arts is one of the many, but important reasons to visit Uzbekistan. The emphasis was also placed on the famous works of European classical artists, which are stored in the museums of Tashkent, Nukus, Urgench, because Uzbekistan has the richest collection of world-famous artists in Central Asia, such as Belloli, Benois, Kandinsky, Kuindzhi, Malevich, Shishkin, Repin , Serov.

Dilbar Gafforova’s presentation was made in a chronological style and was devoted to the history of the development of color art, the theme of new genres formed under the influence of different cultures. The fine art of antiquity is presented on the example of frescoes found in the ruins of Fayoztepa, Varakhshi and Afrosiyob, and the modern fine art of Uzbekistan is presented on the example of the works of talented artists currently working.

It should be noted that the freedom of thought and genres in the field of turfan, contemporary art in our country is an indicator of Uzbekistan’s openness to the modern world.

Non-governmental and non-profit community "Yuzuk e.V." plans to implement various projects in the future in cooperation with the Cultural Heritage Agency under the Ministry of Tourism and Cultural Heritage. Communication with the leadership of the Liechtenstein State Museum turned out to be very productive, the director of the museum, Rainer Vollkommer, showed interest in contemporary artists of Uzbekistan and expressed his readiness to cooperate with the Yuzuk e.V. community.

In addition, at the event, the virtuoso composer Tatiana Vorm-Savosskaya, studying at the Tashkent State Conservatory, presented the concert program “Meeting of East and West”, in which she performed melodies by Bach, Rachmaninoff and Professor Avaz Mansurov. It should be noted that Tatyana Worm-Savosskaya makes a huge contribution to the development of cultural ties between Uzbekistan and Germany.

Among the honored guests of the evening were Prince Yuryevsky (great-grandson of Romanov Alexander II) and his wife Princess Elikonida Yuryevskaya, who were very interested and surprised by the information about Belloli’s painting "The Bather", stored in the art museum in Tashkent. For your information, this painting was a masterpiece, a princely honor of the late 19th-early 20th century, from the art collection of Grand Duke Nikolai Konstantinovich of the Romanov dynasty. The popularity of this unique work of art is connected not only with the skill of the artist, but also with the myths that surround him. According to art critic Boris Chukhovich, the stories that the painting was hidden in the wall and allegedly found again in the 1930s are far from the truth.

The participants of the event expressed their desire to visit Uzbekistan, see the art collections at the Karakalpak Savitsky Museum of Art in Nukus, the Museum of Modern Art in Urgench.

At the end of the evening, a presentation was made on the development of fine arts in Uzbekistan.

For information, under the leadership of the Consulate General of the Republic of Uzbekistan and in cooperation with Tatyana Vorm-Savosskaya, a cultural event is also planned in Karlsruhe