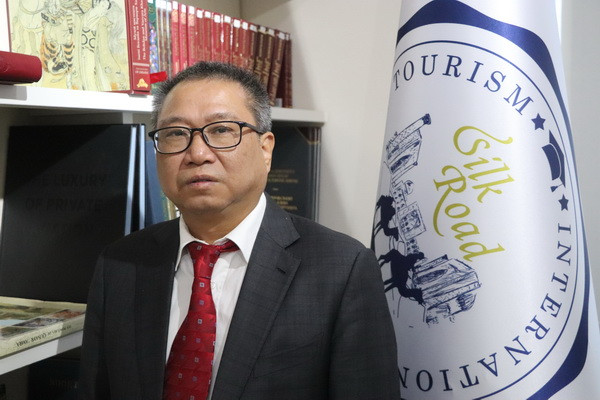 Tashkent, Uzbekistan (UzDaily.com) -- On 1 October 2022, Professor Tongqian Zou from China began working as Vice-Rector for Research and Innovation at the Silk Road International University of Tourism and Cultural Heritage in Samarkand.

Professor Tongqian Zou was recommended for this position by the President of Beijing International Research University Ji Jinbiao.

It should be noted that Professor Tongqian Zou, as Vice-Rector for Research and Innovation, will be responsible for the following areas at the University:

1) further improvement of the quality of research work;

3) to carry out general management of the process of preparation and publication by the staff of the University of scientific papers, including journals and collections of scientific journals, as well as replenishment of the library fund with scientific and periodicals;

4) managing and facilitating the processes of searching, selecting and working with talented youth, managing the process of preparing laureates of prestigious scholarships from among students and research trainees;

5) preparation of proposals for the selection of personnel on a competitive basis, the recruitment of doctoral students, independent researchers and masters, as well as managing the development and implementation of plans for the improvement of the teaching staff;

6) implementation of constant cooperation in the scientific direction with higher educational institutions, ensuring the active participation of the teaching staff in conferences and seminars.

The Silk Road International University of Tourism and Cultural Heritage was founded on the initiative of the President of the Republic of Uzbekistan as part of the Summit of the Heads of State of the SCO Member States, which was held in June 2018 in Qingdao (PRC). In order to train professional personnel in the field of international tourism in Uzbekistan, the University attracted more than 10 foreign professors and teachers who worked in foreign higher educational institutions (USA, China, India, France, Japan, Australia, Turkey), occupying high positions in the field of tourism and cultural heritage.