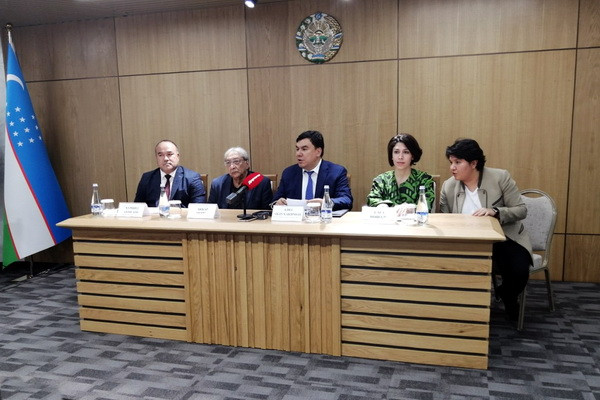 “Atlas Bayrami” Traditional Textile Festival to be held in Margilan

“Atlas Bayrami” Traditional Textile Festival to be held in Margilan

As highlighted by Sara Noshadi, the Head of the UNESCO Office in Uzbekistan, “The Festival contributes to safeguarding of intangible cultural heritage by promoting the know-how of producing the traditional Uzbek textiles. It also supports the improvement of the traditional crafts’ quality and design in all areas of Uzbek textiles ranging from cotton to silk cloth production, carpets, and embroidery, or fashion design. The Festival furthermore supports creativity and the creative economy by bringing together national and international craftspeople, producers, traditional textile experts, designers, manufacturers and fashion specialists”.

The Festival begins with a series of trainings as pre-festival activities on 16-19 October, and continues on October 20 with the official opening, followed by other major events such as the international conference, roundtable discussions, fashion shows and the exhibition. Local communities, visitors, and guests can take advantage of the Festival’s many public activities and performances in the city park.

These events together create a platform of exchange and learning and help raise awareness locally and internationally about the rich and ancient traditions of craftsmanship in Uzbekistan. By organising an international festival in Margilan, the Festival also contributes to the Government’s regional economic development strategy.

As in previous years, the Festival welcomes guests from a wide geographical range, this year with representatives from Kazakhstan, Kyrgyzstan, Tajikistan, Malaysia, India, Turkey, Thailand, Bangladesh, Indonesia, the USA, Latvia, Mongolia, Italy and other countries.

The participation of craftspeople, artists, designers and experts from these countries will offer opportunities for the exchange of ideas on styles, patterns, traditions, and technics. Their presence will be a great inspiration to local and young artisans. Distinguished representatives such as the “Tourism Ambassador” of India to Uzbekistan and renowned fashion designer Ms Ritu Beri will enhance the Festival with their presence.

Pre-festival activities: four days of trainings on traditional craftsmanship, ethno-design and entrepreneurship focused on different types of traditional textiles, held on 16-19 October for craftspeople and designers from all over Uzbekistan and Kyrgyzstan.

Official Opening Ceremony of the Festival on 20 October, including awarding of certificates to the participants of the pre-festival trainings. A highlight of the Opening Ceremony will be the awarding of “World Craft City” to the city of Margilan by a delegation of the International World Crafts Council (WCC). The award will further enhance Margilan’s important role in safeguarding traditional Uzbek handicrafts. The WWC is a non-profit, non-governmental organisation founded in 1964 to promote fellowship, foster economic development through income-generating craft related activities (read more at www.wccinternational.org).

Official Opening Ceremony of the international conference on the “Role of Traditional Textile in Modern World” on 21 October, bringing together international experts, craftspeople, designers and producers from Asia, Europe and America.

Official Opening Ceremony of the international exhibition of traditional textiles “Successors of the Silk Roads” on 22 October, showcasing the great variety of textile craftsmanship with representatives from different countries.

Master classes on making of traditional fabrics and carpets.

Folk festivities for the general public on 20-22 October: outdoor activities for children and families, theatre and music performances, and a craft fair.

Fashion shows of designers from Central Asian, Asia-Pacific regions and Europe on October 20 and 21.

The Gala Concert on 22 October with traditional Uzbek performers will be the closing event of the Festival.