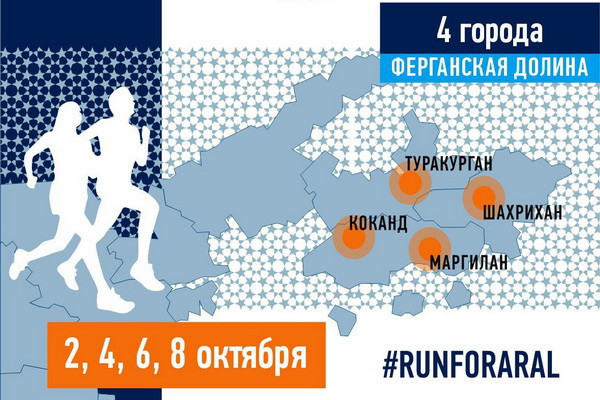 Save Aral - 2022 running relay to be held in Ferghana Valley

Save Aral - 2022 running relay to be held in Ferghana Valley

Tashkent, Uzbekistan (UzDaily.com) -- From 2 to 8 October 2022, the final series of charity mass races Save Aral - 2022 and the last stage of the Cup of the Chairman of the Board of JSC Uzbekneftegaz will be held in four cities of the Ferghana Valley.

The race will take place in Turakurgan, Shakhrikhan, Margilan and Kokand. The organizers of the competition are the Athletics Federation of the Republic of Uzbekistan and Uzbekneftegaz JSC with the support of the Ministry of Sports Development and regional khokimiyats

The running marathon Save Aral - 2022 in the Fergana Valley completes a series of sporting events aimed at drawing the attention of a wide audience to the environmental situation around the Aral Sea basin. The races were held on the territory of industrial facilities of the Uzbekneftegaz JSC system, unique cultural, historical and natural monuments of Uzbekistan. A feature of this year was the participation of employees of the oil and gas industry with a special nomination in the framework of the Cup of the Chairman of the Board of Uzbekneftegaz JSC.

One of the main objectives of the Save Aral mass races is to spread the ideas of strengthening a healthy lifestyle and the gradual introduction of healthy habits among the population. The team of organizers of Save Aral can be seen in large and small cities of the republic, in the most remote and inaccessible areas, always ready to create the atmosphere of a real sports festival.

The Save Aral - 2022 race in the Fergana Valley starts on 2 October in the city of Turakurgan, Andijan region. The race is timed to coincide with the celebration of the Day of Teachers and Mentors in our country. The Athletics Federation decided to highlight this holiday, which is of great importance for everyone involved in big and mass sports. Behind every achievement of an athlete and a non-professional sports fan is the experience, knowledge and hard work of coaches and mentors.

The next cities will be Shakhrikhan, where the race will be held on 4 October, and Margilan, which will take over on 6 October. A series of charity races Save Aral - 2022 will end in Kokand on 8 October. More than 10,000 participants are expected to join the sports festival.

For everyone who wants to take part in Save Aral - 2022, registration will be open on the start day at each race in these cities.