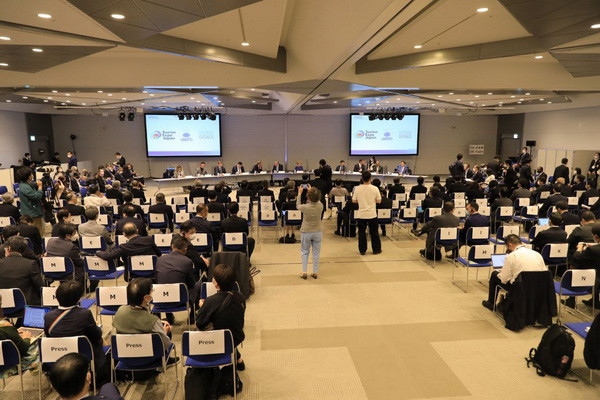 Tashkent, Uzbekistan (UzDaily.com) -- The V Ministerial Conference was held as part of the international tourism exhibition Tourism EXPO Japan 2022 held in Tokyo. The conference is organized by the Japan Tourism Association JATA with the support of UNWTO (United Nations World Tourism Organization).

The event was attended by representatives of the World Tourism Organization, heads of international tourism associations such as ATTA, PATA, WTTC, international experts in the field of tourism, ministers of tourism from a number of countries. The event was also attended by Deputy Prime Minister - Minister of Tourism and Cultural Heritage of the Republic of Uzbekistan Aziz Abdukhakimov.

Aziz Abdukhakimov informed the conference participants about the reforms in the field of tourism in Uzbekistan, the liberalization of the visa regime, the development of transport logistics, the modernization of tourism infrastructure, the construction of new facilities, investment potential, support for the tourism industry during the pandemic, efforts to preserve and restore cultural heritage sites in the country.

According to the analysis of experts from the World Tourism Organization, in 2022 the tourism industry on a global scale began to recover, with more countries easing or canceling travel restrictions.

At the same time, the participants of the conference paid special attention to the partnership between the public and private sectors in order to find new solutions in promoting the tourism sector in the post-pandemic period.

In the speeches of the participants, it was emphasized that the governments of the countries, in cooperation with representatives of the tourism sector, should join forces to support the Glasgow Declaration.

The delegates noted the high importance for the international community of the initiative of the Republic of Uzbekistan to hold in 2023 two major international events of the 14th Conference of the Parties to the Convention on the Conservation of Migratory Species of Wild Animals and the UN Convention to Combat Desertification and Drought, and also agreed to discuss issues of further development the global tourism sector through these initiatives.

As a result of the conference, the parties agreed to develop new mechanisms and intensify actions in tourism, taking into account the challenges associated with global climate change, to interact in matters of public-private partnership, as well as to continue the dialogue between the tourism administrations of countries in these matters.

At the end of the event, foreign ministers, heads of delegation, heads of international organizations were invited to participate in the 25th session of the UNWTO General Assembly in 2023 in Samarkand. The delegates expressed great interest in personally participating in the upcoming event in Samarkand, as well as visiting Uzbekistan to get acquainted with the potential of the republic.