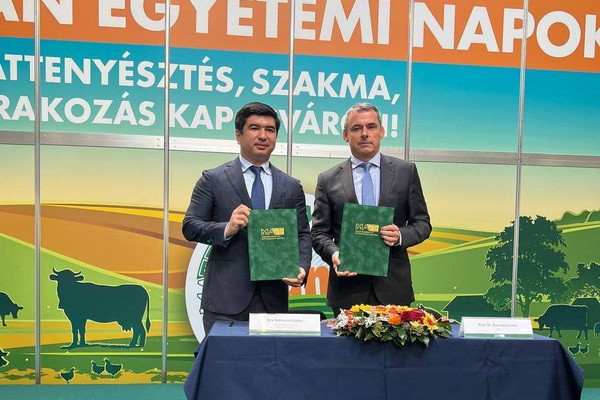 At the meeting between Aziz Voitov and the Deputy Minister of Agriculture of Hungary Sandor Farkas, new areas for the development of cooperation were discussed, in particular, the Hungarian side expressed its readiness to share experience and best practices in the field of digitalization, public procurement systems, subsidies, pricing, efficient use of water and land resources, insurance of the agricultural sector , as well as to familiarize the Uzbek side with the local technology of growing grain and the activities of grain farms and processing enterprises. The parties agreed to create a platform for a joint working group on cooperation in the field of agriculture with the involvement of specialized specialists. The first meeting is planned to be held before the end of 2022.

The parties have prepared a solid package of documents for signing during the visit of the President of Uzbekistan, which outlines all joint plans for the development of cooperation in the fields of horticulture, greenhouse farming, potato growing, viticulture, fish farming, as well as insurance, agricultural science and education.

“Hungary, with its leading research works and experience in the field of seed production, horticulture, fisheries and other areas, is a very promising partner for the joint implementation of investment projects. Aziz Voitov noted during the negotiations. – To date, an indicative result of the Uzbek-Hungarian cooperation in the field of science is the creation of a Joint Potato Center at the AKIS Center in the Tashkent region. In 2021, six Hungarian varieties of potatoes were tested on its basis in the soil and climatic conditions of Uzbekistan, and a crop of 760 kg was obtained. Five out of six varieties are included in the State Register as promising. In May of this year, 52,000 minitubers were already sown for propagation in the greenhouse of the Research Institute of Vegetable and Potato Growing in the Tashkent region, and in the Uzbek-Hungarian center itself, the reproduction of these varieties was organized by virus-free in vitro cloning.”

The parties agreed to assist the Uzbek-Hungarian center in organizing a training program for the effective use of the molecular diagnostics laboratory, which is scheduled to be launched next year. It was proposed to appoint the Hungarian University of Agriculture and Life Sciences (MATE) as the main consultant for the effective implementation of this project.

Aziz Voitov’s meeting with the rector of the Hungarian University of Agriculture and Natural Sciences (MATE) Csaba Dyurich was organized on the same day in the city of Kaposvár during an agricultural fair organized by the university and the "Conference on Rural Development".

MATE is the largest agricultural university in Hungary and Central Europe. It was established in 2000 by integrating two specialized universities, and today has campuses in Budapest, Gyöngyös, Kaposvár and Keszthely, and also has 11 research institutes. The university has 16,522 students (2,234 foreign students), and the teaching staff consists of 985 people. 45 academic programs are taught in English.

During the meeting, the parties signed a Memorandum of Academic Cooperation between the Hungarian MATE University and the Tashkent State Agrarian University, the largest in Central Asia.

The document will facilitate the implementation of joint educational programs, increase the volume of joint laboratory research, exchange of knowledge, specialists and students in such areas as mechanization, viticulture, horticulture, food security and others. It will also allow further improvement of the activities of the Uzbek-Hungarian cooperation on the basis of the Potato Center at AKIS.