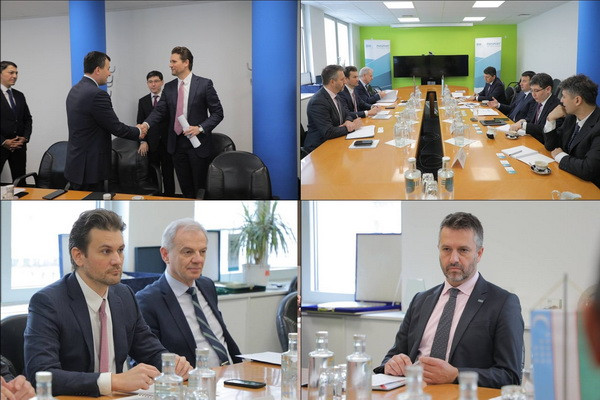 Tashkent, Uzbekistan (UzDaily.com) -- On 30 September, as part of the visit of the government delegation of the Republic of Uzbekistan to Hungary, Deputy Prime Minister - Minister of Investments and Foreign Trade Jamshid Khodjaev held talks with First Deputy Minister of Foreign Affairs and Foreign Economic Relations of Hungary Levente Magyar.

During the meeting, the prospects for the development of multifaceted Uzbek-Hungarian cooperation in trade, economic, investment, scientific, technical and innovation areas were discussed.

In particular, the parties worked out in detail the economic agenda for the short and medium term, including the development of new high-margin investment projects and trade agreements in such areas as agriculture, water-saving technologies, the food industry, pharmaceuticals, electronics, automotive, textile, chemical and metallurgical industry, as well as science, innovation and education.

Issues of developing industrial cooperation, transport and logistics, interregional cooperation, as well as prospects for the participation of Hungarian investment circles in the process of transformation and privatization of state enterprises and assets of Uzbekistan were discussed separately.

At the end of the meeting, an agreement was reached to support direct contacts and further strengthen interaction in all areas of multifaceted partnership.

On the same day, the Deputy Prime Minister - Minister of Investments and Foreign Trade of Uzbekistan Jamshid Khodjaev held talks with the leadership of leading Hungarian companies and banks, such as Wizz Air, MasterGood, KITE, Eximbank, Rába, at which the prospects for establishing partnerships and implementing joint investment projects were discussed.