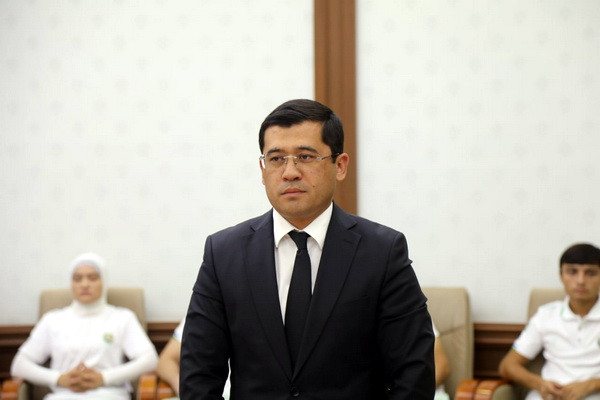 Tashkent, Uzbekistan (UzDaily.com) -- Today, a regular reporting and election conference of the WKF Karate Federation of Uzbekistan was held at the Ministry of Sports Development.

It was attended by representatives of the Ministry of Sports Development headed by Adkham Ikramov, Secretary General of the National Olympic Committee Oybek Kasimov, Deputy Chairman of the Committee Sherzod Tashmatov, employees of the Federation and members of the National Team, regional representatives (via the ZOOM platform), veterans. The agenda of the conference included such issues as the election of a new chairman of the Federation, the reorganization of its leadership and the Executive Committee.

At the beginning of the event, A. Ikramov emphasized that karate is one of the favorite sports among the youth of Uzbekistan, especially in remote regions, where many people show interest in this discipline, in turn, this sport is quite developed in our country and members of the national team deserve defend the honor of the Motherland in the international arena.

The candidacy of Talipov Rashid Azatovich, a responsible officer of the secretariat of the Cabinet of Ministers of the Republic of Uzbekistan for education, health and sports, who had previously worked fruitfully in the sports field in various positions, was proposed for the post of chairman of the Federation and was unanimously approved by the conference participants.

Thus, Rashid Talipov was elected the head of the WKF Karate Federation of Uzbekistan. Farrukh Tashkentbaev was elected as the Secretary General of the Organization, and Alam Mullaev, Bakhtiyor Nigmatullaev, Anvar Mukhamedov, Saparmurod Dzhimurotov, Ilkhom Mamadaliev, Burkhon Rakhmonov and Dilnoza Bakirova were appointed vice-presidents of the Federation. During the event, members of the Executive Committee were also formed and the Charter of the organization in a new edition was approved.

Speaking at the meeting, Rashid Talipov thanked for the high trust placed in him and noted that he would work hard on the path of development of karate in our country. At the same time, he called on everyone to unite in organizing the upcoming major competitions, including the Asian Championship among adults, which will be held in Tashkent in December this year.