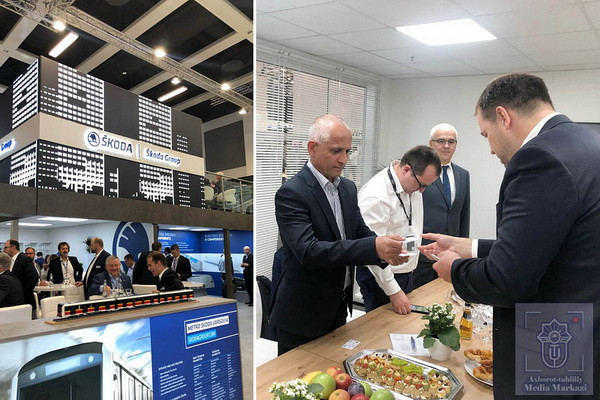 Tashkent, Uzbekistan (UzDaily.com) -- Today, the largest international trade exhibition of transport technologies in terms of innovative components, vehicles and systems "InnoTrans 2022" continued its work in Berlin (Germany). The delegation of the railway administration of Uzbekistan, headed by acting. Chairman of Uzbekiston Temir Yollari H. Khasilov is taking part in the event.

Within the event, a memorandum was signed on using a credit line from the German Development Bank KFV to purchase electric trains and passenger cars for Uzbekistan. Negotiations were also held with the Polish concern Pesa and the Chinese corporation CRRC Corporation Limited.

During the third day of InnoTrans 2022, the delegation from Uzbekistan also held a number of fruitful meetings and negotiations with the world’s leading railway manufacturing companies. In particular, a discussion was held with representatives of the Škoda company (Czech Republic). Proposals on the purchase of modern electric locomotives were studied.

The Swiss Stadler also offered variants of its modern technology, not only electric locomotives and passenger cars, but also passenger-and-freight locomotives. In addition, issues of organizing joint production of railway equipment in Uzbekistan were discussed.

Negotiations were also held with the Spanish company Patentes Talgo S.L.U. At the meeting, issues of acquiring additional high-speed trains were discussed, in particular, it was announced that a tender would be announced soon, in which this company would take part. The parties also agreed to continue their long-term relationship for the maintenance of high-speed trains in Uzbekistan.

Today, within the framework of the international exhibition, at other sites and expositions, the demand and supply for passenger cars used and produced in Europe were also studied.