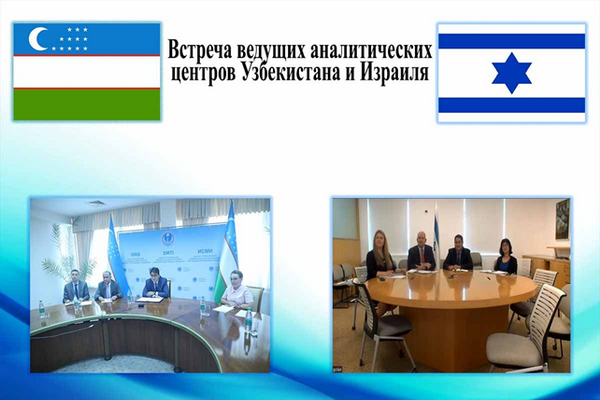 Tashkent, Uzbekistan (UzDaily.com) -- On 22 September, an online meeting was held between the Institute for Strategic and Interregional Studies (ISMI) under the President of the Republic of Uzbekistan and the Center for Political Studies (CPR) of the Israeli Foreign Ministry with the assistance of the Embassy of Uzbekistan in Tel Aviv.

During the meeting, the parties exchanged views on the current state and prospects of Uzbek-Israeli relations, and also discussed the development of interaction between the analytical centers of the two countries.

Opening the webinar, Ambassador Extraordinary and Plenipotentiary of Uzbekistan to Israel Feruza Mahmudova emphasized the importance of maintaining ties between the expert and analytical circles of the two countries, because they give impetus and dynamism to the development of friendly relations.

In developing the discussion, ISMI Deputy Director Bobur Usmanov noted that Uzbekistan and Israel, despite the considerable distances between them, are connected by historical and cultural closeness, traditional friendship and close cooperation.

According to him, the development and strengthening of mutually beneficial and comprehensive relations with Israel remains one of the priorities of Uzbekistan’s foreign policy.

In turn, Ofer Moreno, head of the Israeli CPI department, emphasized that “Israel considers Uzbekistan as the most important and promising partner in Central Asia. Consistent reforms and significant changes observed in Uzbekistan have a positive impact on the development of relations between our countries.”

During the online meeting, the parties noted that this year marks 30 years since the establishment of Uzbek-Israeli diplomatic relations. During this period, multifaceted relations have developed between the two countries in various areas of cooperation.

The significant progress achieved within the framework of the trade and economic partnership between the two countries was emphasized. At the same time, the creation of the Israel-Uzbekistan Chamber of Commerce in 2021 was an important step in bringing the business circles of the two countries closer together and taking concrete measures to increase economic cooperation.

The priority of strengthening the fruitful Uzbek-Israeli cooperation is also the implementation of joint projects in important sectors of industrial production, ICT, agriculture and the service sector.

During the webinar, experts also noted the importance of creating effective mechanisms for expert interaction that could contribute to the further development of Uzbek-Israeli relations.

As a result of the event, representatives of the ISMI and CPI expressed their readiness to continue the dialogue and exchange of views to develop proposals that would allow developing cooperation between Uzbekistan and Israel in all promising areas of the bilateral agenda.

The Center for Political Studies is an analytical center of the Israeli Ministry of Foreign Affairs, established in 1974. The main tasks of the IIC are to collect and analyze information of importance to Israel’s international relations and security.