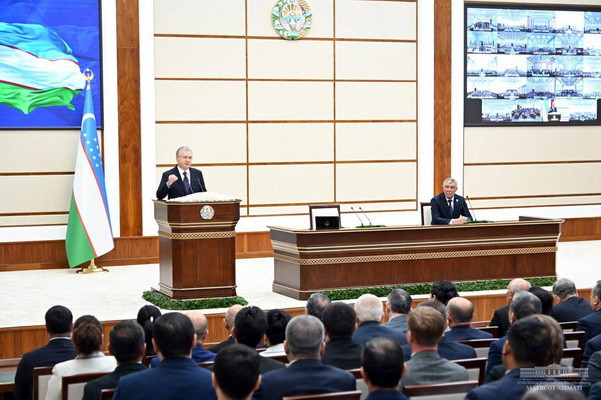 Tashkent, Uzbekistan (UzDaily.com) -- President of the Republic of Uzbekistan Shavkat Mirziyoyev took part in an extraordinary session of Tashkent regional Kengash of People’s Deputies. At the beginning of his speech, the head of state expressed deep respect for the people of the region and noted that they make a significant contribution to the development of the economy of our country.

- You all understand that in the current troubled time, the task of ensuring the interests of our native country and the prosperous life of the people is acute, implementing a sustainable foreign and domestic policy. To do this, you need to look for something new every day and take full advantage of all opportunities. Tashkent region has an ancient history, rich natural resources, and large-scale industry. I meet many people, they feel the changes, they talk about them. But they also ask whether these efforts will be continued, whether life will be even better. Therefore, together with our people, it is necessary to solve problems in mahallas, support entrepreneurship, open new enterprises and jobs, said Shavkat Mirziyoyev.

The session considered an organizational issue. The President recommended the candidacy of Zoyir Mirzaev for the post of khokim of Tashkent region.

Mirzaev was born in 1968 in Samarkand region. For many years he worked in the field of finance and economics. He headed Samarkand and Kashkadarya regions. As Deputy Prime Minister, he oversaw the agro-industrial complex. Since November 2021, he has been acting as the khokim of Tashkent region.

Before discussing the candidacy, the head of state offered to hear his plans. Zoyir Mirzaev voiced his proposals for the development of entrepreneurship, industry, agriculture and tourism, infrastructure, and the creation of decent living conditions for the population of the region.

The President approved these proposals and gave instructions to responsible persons to resolve organizational and financial issues.

Thus, an additional 200 billion soums will be allocated for family entrepreneurship programs this year, and another 850 billion soums next year. For Pskent, Buka, Bekabad and Akkurgan districts, where this sector is underdeveloped, the size of the loan guarantee from the Entrepreneurship Support Fund will be increased to 75 percent, and tax benefits will be provided until 2025.

The industrial potential of Tashkent region is huge. The cities of Almalyk, Chirchik, Angren, Bekabad, Akhangaran and Yangiyul are becoming large industrial centers. It was noted that 250 billion soums will be allocated for the development of the infrastructure of industrial zones, and US$30 million for leather, footwear and textile projects. Instructions were given to create a cluster of porcelain and ceramics in Angren, a border trade zone in the Bekabad region.

The region also has large land and water resources. However, their effectiveness is low. By properly organizing the work, it is possible to double the export of fruits and vegetables and provide jobs for 120,000 people.

It was emphasized that for this purpose it is necessary to transfer 9 thousand hectares of land to dekhkan farms, develop mountainous areas, create nurseries of fruit trees and vines. It was noted that US$50 million will be allocated for the opening of logistics centers in Tashkent, Parkent, Yangiyul and Kibray districts, and US$30 million for the development of animal husbandry.

There are 1,022 mahallas in Tashkent region. When studying their infrastructure, it was revealed that internal roads in 840 mahallas, drinking water supply and sewerage networks in 579 mahallas, electricity and gas supply networks in 589 mahallas, schools, kindergartens and clinics in 396 mahallas need to be repaired. The head of our state stressed the importance of these issues in ensuring the quality of life of the population and educating the younger generation, and gave relevant instructions to responsible persons.

Tourism is another potential source of economic growth in the region. But 80 percent of tourists go to Bostanlyk region. Conditions and services in other areas do not meet the requirements. The possibility of organizing tourism clusters in the mountainous regions of Parkent, Angren and Akhangaran is indicated.

At the session, attention was also paid to the development of the social sphere, providing the population with housing. Tasks were set to open a university in Nurafshan, build a multidisciplinary medical center, and repair educational institutions.

It was noted that 100 billion soums will be allocated to subsidize housing for the population, and the New Uzbekistan array will be built in Zangiota district. It is proposed to introduce a new mortgage program "My First Home".

The President stressed that the new khokim, to whom the representatives of the people expressed high confidence, should act fairly, honestly, selflessly and responsibly, diligently serve the residents of Tashkent region.