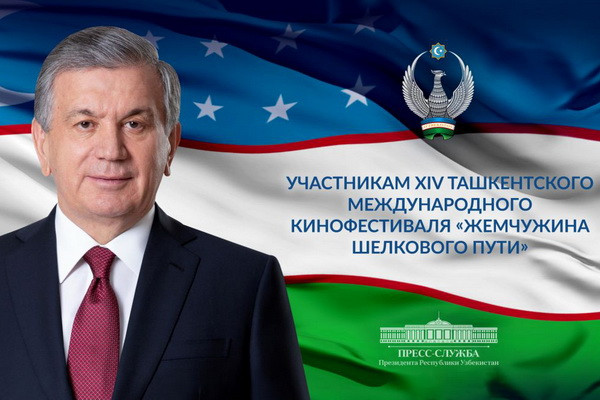 I sincerely congratulate all of you – the famous actors and filmmakers, cameramen and artists, producers and film critics, prominent representatives of culture and art, who have come from different countries of the world, on the opening of the 14th Tashkent International Film Festival «Pearl of the Silk Road».

More than 300 masters of cinema from 35 countries take part in the current forum, which is held under the motto «For the sake of peace, enlightenment and progress». This is evidence of the fact that the Tashkent International Film Festival, which has more than half a century-long history, is acquiring a new meaning and significance in the New Uzbekistan, as well as its authority is strengthening around the world.

It is well-known, that our country has paid particular attention to the development of cinematography in accordance with the modern demands over the past few years. We have established relationships with famous film companies of the world, and have reached agreements on cooperation in film production with more than 30 countries. To implement the national and foreign projects, special film towns are being built. Extensive favorable conditions are being created for foreign companies aimed at directing films in Uzbekistan.

I hope that during the festival you will get acquainted with our reforms in the sphere of cinema and make your suggestions on further improvement of work efficiency in this direction.

I am confident that public meetings and discussions, lively debates and numerous premieres of feature films at the film festival opening today will have an impact on the creative work of all festival participants, as well as the development of culture and art in Uzbekistan.

I congratulate all of you once again on the opening of the 14th Tashkent International Film Festival, may this wonderful holiday of art give the unforgettable impressions, discover new names and talents in the world of cinema.

I wish you all of you sound health, new creative achievements and successful work at the film festival.

President of the Republic of Uzbekistan