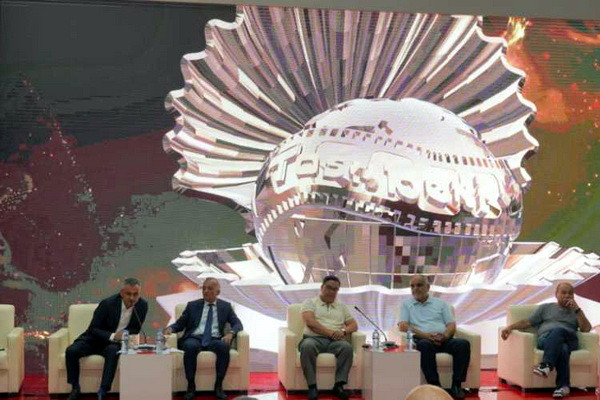 Tashkent, Uzbekistan (UzDaily.com) -- From 13 to 17 September, Days of Russian Cinema will be held in Tashkent and Bukhara as part of the XIV Tashkent International Film Festival "Pearl of the Silk Road".

At free screenings, residents and guests of Uzbekistan will be able to watch the sports drama "Mr. Knockout", part of which was filmed in Tashkent and Bukhara; comedies "Slave" and "High Security Parents", as well as the melodrama "Portrait of a Stranger". Films will be shown in Russian with Uzbek subtitles.

Days of Russian cinema in Uzbekistan under the brand of Russian Film Festival are organized by ROSKINO with the support of the Ministry of Culture of Russia and the Cinematography Agency of Uzbekistan.

ROSKINO Director General Inna Shalyto said: “For the second year in a row, we are presenting a program of contemporary Russian films as part of the Tashkent International Film Festival. This year we brought a sports drama about the Soviet boxer Valery Popenchenko, whose youth was spent in Tashkent, as well as two comedies and a melodrama – we hope that the audience will like them. Within the framework of the film festival, we intend to discuss a number of issues related to cooperation with the Uzbek film industry. Several large joint projects between Russia and Uzbekistan have been created over the past two years, and we hope that our joint efforts with the Film Agency of Uzbekistan will contribute to the emergence of new bright films that will be of interest to an international audience.”

Director General of the Cinematography Agency of Uzbekistan Firdavs Abdukhalikov: “Our cooperation with the Russian film industry is strengthening; Russian films are an important component of the Tashkent Film Festival and attract many viewers. With the opening of a branch of VGIK last year, education in the field of cinematography also reached a new level. Joint film production is also becoming more active: eight joint documentary films have already been released on Russian TV channels, four films are in production, three feature films have been completed. At the XIV Tashkent International Film Festival, we plan to sign a number of new agreements on cooperation and specific projects with Russian companies. I am confident that the festival, like last year, will become an effective platform for discussing further partnerships.”

On 13 September, at the opening of the Days of Russian Cinema in Tashkent at the Yulduz Cinema, Uzbek viewers will see the sports drama "Mr. Knockout" about the life of the legendary Soviet boxer Valery Popenchenko, champion of the USSR, Europe, winner of the 1964 Olympic Games, and his legendary coach Grigory Kusikyantse. Many scenes of the picture were filmed in Uzbekistan. The film will be presented to the public by special guests of the opening ceremony of the Days of Russian Cinema - film director Artem Mikhalkov and actor Sergei Bezrukov.

The program of the Days of Russian Cinema in Uzbekistan will also include the highest-grossing Russian film in history - the comedy "Kholop" by Klim Shipenko with Milos Bikovich in the title role. The picture tells the story of the re-education of the selfish "major" Grisha, who, one not very fine day after the accident, comes to his senses ... in 1860 in a manor's estate. Now he is an ordinary serf without connections and communications: they have not heard about smartphones here, and everyone around him is serfs. Grisha will have to go through a difficult path in order to turn from an impudent son of rich parents into a person who knows how to appreciate simple things, knows how to make friends, and, of course, love. The rights to the remake of the film "Kholop" were acquired by several foreign countries at once, including China. The film will be presented to the audience by actor Alexander Samoylenko, a native of Tashkent.

Another comedy about re-education is the film "High Security Parents" directed by Nikita Vladimirov. Parents are tired of being ashamed of the actions of their son, who is also the mayor of their city, and among the people he has a stable reputation as a “grabber”. Having learned that the stealing mayor was going to run for a second term, mom and dad decide not to wait until they “come” for their son, but “plant” him themselves - this is how a secluded forest house on the outskirts of the town will turn into a secure facility where parents will try to correct pedagogical mistakes and instruct the mayor on the true path. Starring Alisa Freindlikh, Alexander Adabashyan, Yevgeny Tkachuk.

Melodrama "Portrait of a Stranger" by Sergei Osipyan is the story of an unlucky actor who, in Moscow in 1976, meets a charismatic writer, a living classic who turns his life into a tragicomic farce with a dissident bohemian as well as the romantic era of the 70s, the time of the intelligentsia, talented people and joyful discoveries. The peculiarity of the project lies in the fact that the entire troupe and many employees of the Moscow theater "Pyotr Fomenko's Workshop" were involved in the filming.