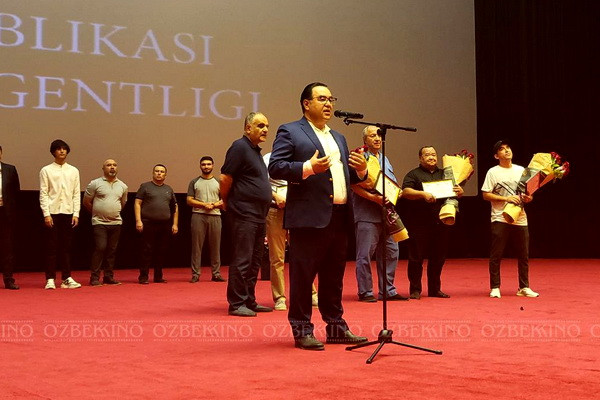 Tashkent, Uzbekistan (UzDaily.com) -- On the eve of the XIV Tashkent International Film Festival "Pearl of the Silk Road", a presentation of the largest commercial screen in the CIS countries, showing films in DCP format, was held. The presentation was timed to coincide with the celebration of the 31st anniversary of the state independence of the Republic of Uzbekistan, as well as the start of the Film Days of Uzbekistan as part of the upcoming film festival.

The guests who came were able to appreciate the richness of the sound, the quality and completeness of the picture by watching the most anticipated and commercially successful film of this year “Baron-2. Return" on a large-scale screen, striking in its size.

“Large-scale reforms carried out in the new Uzbekistan are being actively implemented in the field of cinematography. Last year, at the initiative of the president, we revived the House of Cinematographers, where the opening of the XIII Tashkent International Film Festival took place. This is a truly legendary place where a shady, sprawling garden once bloomed, and which fell into despondency and desolation. Today we are presenting a large-scale screen showing a picture in DCP format. In total, 5 screens will be placed in the House of Cinematographers. The cinema itself can accommodate 1809 people at a time. From tomorrow, pre-holiday screenings will begin here, timed to coincide with the 31st anniversary of the independence of the Republic of Uzbekistan, available to every resident and guest of the country,” commented Firdavs Abdukhalikov, Director General of the Cinematography Agency of Uzbekistan.

The scale screen was 29.5 meters wide and 14 meters high.

“In the House of Cinematographers, we installed the largest rental screen in the CIS countries. The screen was created by the French company Harkness Screens, which is a world leader in the field of screen production technologies for various applications,” said Sukhrob Makhmudov, a representative of Asia Cinema.

As part of the opening ceremony, the most active figures of the Kinokaravan project, which took place from 14 to 21 August in the Republic of Karakalpakstan under the motto “In New Uzbekistan, people are dear, people are dear,” were also awarded.

“When I saw this image, I was incredibly happy, because we have reached and stood on the same level with world cinema. Such a cinema should have been in every self-respecting country. It is stated that here, in the House of Cinematographers, there will be several more screens showing films in the DCP format. This is a huge breakthrough. Aerobatics. The most magnificent Dolby Atmos sound, a powerful projection appeared - clear and bright,” said Rashid Malikov, a famous director and screenwriter.

“The House of Cinematographers has been transformed. Such a large-scale cinema hall was opened, in our time there was nothing like it. I am very glad that today’s filmmakers have the opportunity to show their films, talking about the most important things, on such a screen. Now the cinema of Uzbekistan is experiencing a revival and it shows. It is felt, and it is being revived throughout the country, in all regions,” says Abdurahim Ismailov, Honored Artist of Uzbekistan, famous cameraman and hero of the day.

“I can’t express the emotions that overwhelm me. I am glad that today much attention is paid to the development of Uzbek cinematography, colossal changes are taking place. What a beautiful appearance the House of Cinematographers of Uzbekistan has acquired. I have no doubt that this is just the beginning! ”said film director Khilol Nasimov.

Another important event was that the Film Agency signed agreements with national state and commercial TV channels and began showing new Uzbek films as part of the Film Days of Uzbekistan.

“Today is a very exciting day for me. Opening of the renovated House of Cinematography and premiere of the film “Baron-2. Return" on the largest DCP-screen in the CIS countries. The creation of such a cinema is an important step in the field of cinematography. This is victory. I was very inspired both as an actor and as a director by such a significant discovery,” said Farkhad Makhmudov, the lead actor in the film “Baron-2. Return".