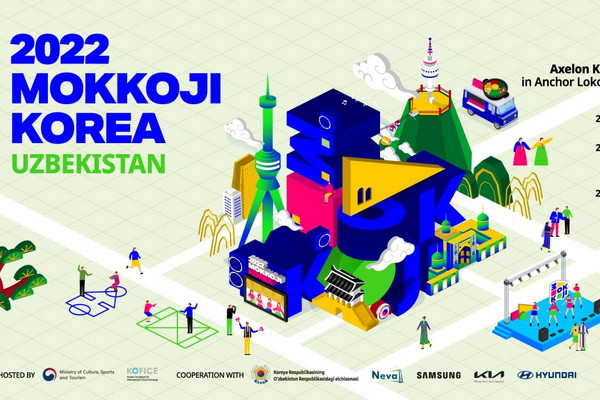 Tashkent, Uzbekistan (UzDaily.com) -- The World Festival of Korean Culture MOKKOJI KOREA will be held in Uzbekistan for the first time.

This year, Uzbekistan and Malaysia have been chosen as the countries for offline activities. The rest of the world will follow the festival online. Tickets for the concert of popular K-pop artists cannot be bought - only won.

On 24-25 September, Tashkent will host the World Festival of Korean Culture MOKKOJI KOREA 2022. The organizers are the Ministry of Culture, Sports and Tourism of the Republic of Korea and the Korean Foundation for International Cultural Exchange.

During MOKKOJI KOREA, popular K-pop artists interact with fans, and hallyu fans can visit exhibitions and events for free, get to know the Korean lifestyle and culture. This year the festival is held offline for the first time. In 2020 and 2021, due to the pandemic, MOKKOJI KOREA went online and the target countries were Myanmar, Philippines, Kazakhstan, Russia, India, Indonesia.

MOKKOJI (모꼬지) means "to arrange a joint meeting, a feast" in Korean.

Hallyu is a term for the spread of modern South Korean culture throughout the world.

MOKKOJI KOREA 2022 will host a number of activities, including:

an exhibition of Korean dramas with the opportunity to try on costumes from popular TV shows;

The final concert will feature singer, rapper, actor and dancer EXO Kai, singer Ailee, boy band F.able. There will also be “mini-discussions” dedicated to the culture of Korea and Uzbekistan for Hallyu fans.

On 12 November, the MOKKOJI KOREA 2022 festival will continue in Kuala Lumpur.