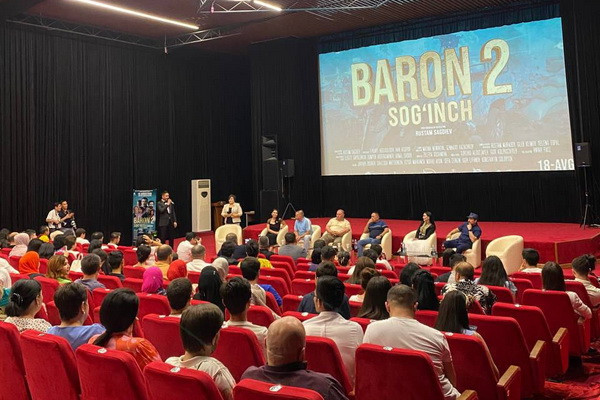 Tashkent, Uzbekistan (UzDaily.com) -- On 18 August, a press conference dedicated to the film "Baron 2. Return" was held at the Alisher Navoi Cinema Palace. It was attended by the organizers of the film festival, namely the leadership of the Cinema Agency, the producer and film crew of the film, the leading actors, as well as media representatives, bloggers and prominent figures of culture and art of Uzbekistan.

Filming of "Baron 2. Return"took place in Uzbekistan, Russia and Turkey. For the first time in the film practice of Uzbekistan, the tape was filmed in ultra-high 4K resolution, which provides high-definition images for digital and home cinemas.

The film tells about the complexities of the mission of representatives of the special services on the example of an Uzbek intelligence officer, whose role was skillfully embodied by the actor Farhad Makhmudov, who fell in love not only with the Uzbek but also with the foreign audience in the films "Brigade", "Alien Pack", "Amanat", "Life Syndrome" and others.

“In New Uzbekistan, special attention was paid to the development of fruitful cooperation with countries near and far abroad in the field of culture, in this regard, the painting “Baron 2. Return” is of particular importance. This is one of the first paintings that we created in New Uzbekistan in the co-production format.

I will not hide, this film is long-awaited. On the way of its creation, director Rustam Sagdiev encountered some difficulties, in connection with which we were forced to look for a second producer. Ivan Arkhipov and his production center "Inferno" (Russia), with joy and enthusiasm, took up the production and investment of the project. New ideas appeared, the script expanded significantly. Another plus is that the picture has gathered a solid cast from 5 countries. For us, this is also important because, within the framework of the upcoming XIV Tashkent International Film Festival, we have planned cooperation with many countries of the world. Memorandums will be signed on the creation of new joint film projects. To some extent, the film "Baron 2. The Return" is a symbol of the beginning of multilateral international cooperation. Unlike the first part, "Baron-2" today, August 18, is released in Russian cinemas. And this means that for the first time in the history of the cinema of New Uzbekistan, a domestic film project will be able to receive its share of the profits from distribution from outside,” commented Firdavs Abdukhalikov, Director General of the Cinematography Agency of Uzbekistan.

“I am sure that such films are vital. They need to be created and released to the public. The tape touches on the extremely important topic of the fight against the global evil - terrorism. I would like to believe that the film will open the eyes of many, perhaps even save someone’s life. Despite some differences in creative matters, to be honest and in simple words, I just got high! I was very pleased to work with Rustam Sagdiev and with a professional team. I want to thank all the caring people who assisted in the production of the film. Separately, I would like to thank the Cinema Agency of Uzbekistan. The management of the agency from the first days did everything for the film to be released. The film will be shown in Russia, Uzbekistan, Tajikistan, all over the world, - said the film’s producer Ivan Arkhipov.

After the press conference, all those present were waiting for a closed premiere screening of the film "Baron 2. The Return". Film director Rustam Sagdiev, film producer Ivan Arkhipov, leading actors Farhad Makhmudov and Dilnoza Kubayeva answered questions regarding the premiere in a friendly informal atmosphere.

“Shooting in the second Baron was another wonderful experience for me. The image of my hero is very close and interesting to me, I hope that he will resonate in the hearts of the audience. Considering that the viewer liked the first picture, I would like to believe that the continuation will arouse no less interest. Separately, I want to note the professionalism of the entire film crew and thank the Cinema Agency for their help and support. Without her, the film simply would not have come out. I would like to express my deep gratitude to the President of the Republic of Uzbekistan, Shavkat Mirziyoyev, for the fact that our countries are actively cooperating and creating joint projects today,” the leading actor, actor Farhad Makhmudov, shared his opinion.

“I am very glad that today such serious and large-scale transformations are taking place in our country. Motion picture "Baron-2. Return" was created in the format of co-production, and this is a very important and significant step on the part of the leadership of the Cinema Agency. According to the agreement signed with Russian partners, the picture acquires two statuses - a full-length film and the status of a series. This opens up great prospects for us in the field of market relations,” shared the director of the film, Rustam Sagdiev.

Within the framework of the XIV Tashkent International Film Festival “Pearl of the Silk Road”, the creative team of the film represented by Rustam Sagdiev, Ivan Arkhipov Victoria Tolstoganova, Igor Lifanov, Farhad Makhmudov, Viktor Verzhbitsky will walk the red carpet, after which the film will be presented on large screens.