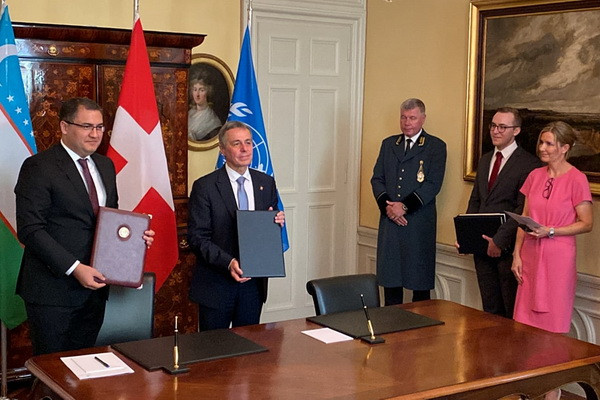 Representatives of the UN, in particular, Executive Coordinator of the UN IPTF Office J. Topping, also took part in the signing ceremony of the Agreement.

The signing of the agreement marks the immediate return by Switzerland of US$131 million to the people of Uzbekistan, previously illegally acquired by an organized criminal group headed by Gulnara Karimova and legalized in Switzerland.

The conclusion of this Agreement is the result of fruitful and productive cooperation, as well as careful work and many rounds of negotiations over the past 2 years between the Ministry of Justice together with the competent departments of Uzbekistan, as well as the Ministry of Foreign Affairs and interested ministries of Switzerland with the participation of the UN.

In accordance with the Agreement, the key principles for the return of illegally acquired assets are:

- openness and transparency, open publication of information related to restitution for the public;

- participation of civil society in this process;

- the final use of the returned funds in the social sphere, in particular, for education and health care;

- maintaining a constant, fruitful and respectful dialogue on restitution issues between Uzbekistan and Switzerland.

Particular attention should be paid to the restitution mechanism, which is tripartite, with the participation of Uzbekistan, Switzerland and the UN.

The Fund has the following administrative and organizational structure with relevant functions and powers:

The Steering Committee (one representative each from Uzbekistan, Switzerland and the UN) - makes decisions by full consensus on the operational activities of the Fund, including the review and approval of projects.

In addition, the organizational structure also includes the Civil Society Advisory Council - consisting of representatives of civil society in Uzbekistan and Switzerland, as well as international NGOs, exercising public control over the activities of the Fund, and which will carry out its activities on a voluntary basis and without salary.

The projects approved by the Steering Committee will be implemented by the relevant UN agencies in Uzbekistan together with the Uzbek side.

All information about completed and ongoing projects will be published and available to the general public.

Such a system will minimize corruption and other risks, as well as ensure transparency and accountability in spending funds.

The signing of this Agreement is a significant step in the further building of friendly and mutually beneficial relations between Uzbekistan and Switzerland.