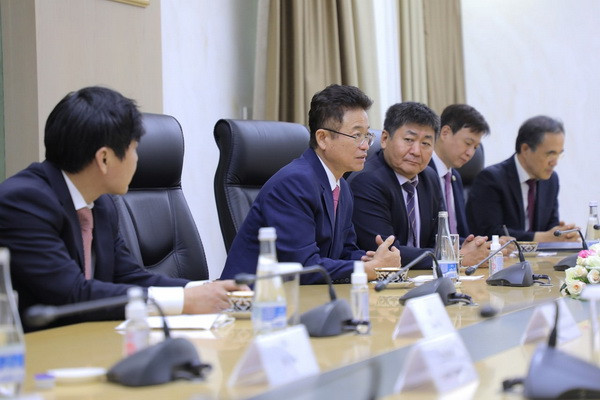 Prospects for strengthening interregional cooperation with South Korea were considered

Prospects for strengthening interregional cooperation with South Korea were considered

During the talks, the current state and prospects for the development of Uzbek-Korean cooperation were discussed with an emphasis on the areas of investment, trade and interregional cooperation.

In particular, the parties welcomed the opening of the Daegu Gyonbuk Machinery Cooperative marketing center on the territory of Kor-Uz Textile Technopark, which took place in August this year. The Korean side expressed confidence that the center will create every opportunity to further deepen industrial cooperation between the two countries, including the production of finished textile products with high added value for their subsequent export to the markets of third countries.

Opportunities were explored for establishing industrial cooperation between manufacturers in the regions of Uzbekistan and Korea, with a focus on the areas of "green" energy, electronics, automotive, pharmaceuticals and other promising areas. The prospects of organizing visits of delegations of business circles from Gyeongsangbuk-do province and various regions of Uzbekistan, holding joint business forums and negotiations in B2B and B2G formats were noted.

During the conversation, the prospects for cooperation in the field of vocational education were also considered. The Korean side expressed its readiness to assist in organizing the training of students from Uzbekistan in higher educational institutions of the province of Gyeongsangbuk-do with the prospect of their further employment in leading companies in the region.

In addition, the importance of joint work on the implementation of joint start-up projects and the training of qualified personnel in the field of advanced technologies was noted within the framework of the signed quadripartite Memorandum between Inno Technopark and Akfa University from the Uzbek side and Gyeongbuk Technopark and Yongnam University from Korean side.

Following the meeting, the parties agreed to hold talks on a regular basis, including via videoconferencing, in order to "align hours" on the implementation of current agreements, as well as to develop new areas of interaction.