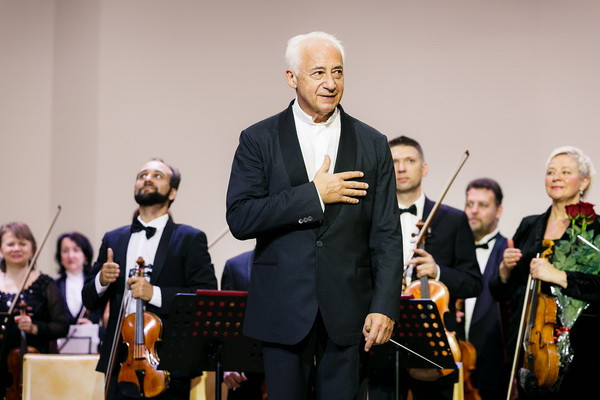 Tashkent, Uzbekistan (UzDaily.com) -- On 8 September, Tashkent will host a charity concert of the National Philharmonic Orchestra of Russia conducted by People’s Artist of the USSR conductor and violinist maestro Vladimir Spivakov.

The National Philharmonic Orchestra of Russia will give the only concert in Tashkent - on the stage of the Palace of International Forums "Uzbekistan". Vladimir Spivakov, Artistic Director and Principal Conductor of the NPR, People’s Artist of the USSR, UNESCO Artist of Peace, will perform at the NPR’s conductor’s podium. The concert will be held with the assistance of the Alisher Usmanov Charitable Foundation "Art, Science and Sport" and the Foundation for the Development of Culture and Art under the Cabinet of Ministers of the Republic of Uzbekistan.

In the first part, the orchestra and the maestro will be performed by pianist Ivan Bessonov, a constant creative partner of Vladimir Spivakov and his team, a graduate of the Central Music School and the Moscow Conservatory, a student of Professor Valery Pyasetsky. The 20-year-old pianist is the winner and laureate of many prestigious international competitions, including the Eurovision Young Musicians classical competition in Edinburgh, Astana Piano Passion in Astana, the Grand Piano Competition in Moscow and the First International S. V. Rachmaninov Competition (2022 ). He was also awarded the international awards BraVo (2019, in the category "Discovery of the Year") and "Victoria" (2021).

The soloist in the second part of the concert will be the singer Ekaterina Petrova (soprano) - a graduate of the Samara Academy of Culture and Arts, soloist of the Moscow New Opera Theater named after E. V. Kolobov and the Galina Vishnevskaya Opera Singing Center, guest soloist of the Bolshoi Theater of Russia, laureate and diploma winner international competitions. The singer’s repertoire includes leading roles in Tchaikovsky’s Eugene Onegin (Tatiana), Tchaikovsky’s Iolanthe (Iolanthe), Gounod’s Faust (Marguerite), Bizet’s Carmen (Michaela) and others. The artist has repeatedly taken part in concerts and tours of Vladimir Spivakov and the NPR.

The Tashkent program will open with a symphonic masterpiece of the era of romanticism performed by the NPR - a suite by the Norwegian classic Edvard Grieg from the music for Henrik Ibsen’s drama "Peer Gynt". Vladimir Spivakov says this about Grieg’s music: “It naturally penetrates the soul - like the air of Bergen. It is no coincidence that Tchaikovsky said about him: “Sincere greetings from such a colleague as the brilliant Grieg is the highest delight that an artist can get.” These two composers are united by a comprehensive feeling of Love for God’s World. Only by possessing this feeling, one can create a work that will outlive its creator.”

The annual performances of the National Philharmonic Orchestra of Russia and Vladimir Spivakov in Uzbekistan have become a good tradition over the course of several years. The maestro kept the warmest memories of each meeting with the Uzbek public.

“I really love Tashkent, this country as a hospitable, generous, peaceful and calm land,” says Vladimir Spivakov. - Uzbekistan can rightly be proud of its talented youth. Many admire the worthy participation in international competitions held abroad, in particular in Russia, of such gifted Uzbek musicians as Nadir Khashimov, Aziz Shokhakimov. While visiting the Center of National Arts, I was convinced that the people highly appreciate the national culture, spiritual heritage, art and traditions of each region of Uzbekistan ... The great attention paid to the field of musical art testifies to the concern for the future of the country, the spirituality of the people, the education of a harmoniously developed young generations. I would like to emphasize that the Uzbek audience feels music very subtly and deeply, they highly appreciate art.”

The concert will be available to students of the specialized music school named after R.M. Glier, the Republican Specialized Music School named after V. A. Uspensky, the State Conservatory of Uzbekistan and other educational institutions of the capital and its region. Also, invitations will be given to cultural figures, the diplomatic corps, teachers, media representatives, bloggers, inclusive resource centers and students of specialized boarding schools for children with disabilities.

Organizers are Art and Culture Development Foundation under the Cabinet of Ministers of the Republic of Uzbekistan, Alisher Usmanov Charitable Foundation "Art, Science and Sport".