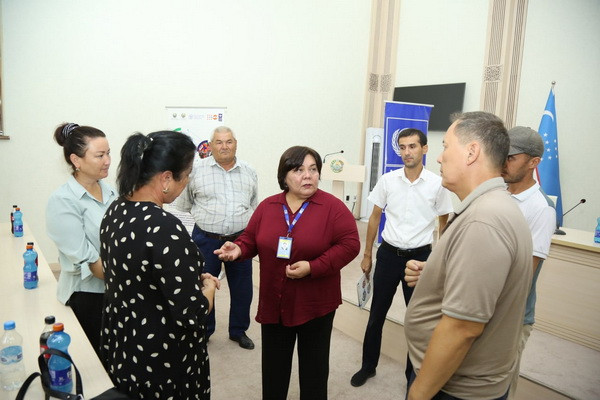 Tashkent, Uzbekistan (UzDaily.com) – On 3-4 August 2022, within the framework of the Joint Program of UNDP, UNFPA and FAO “Promoting the creative and innovative potential of youth and vulnerable populations by strengthening their adaptive capacity to solve problems of economic and food security in vulnerable communities of the Aral Sea Region”, a joint event was held to launch the UNDP project “Improving Health Protection in the Aral Sea Region by Providing Access to Safe Drinking Water in Rural Areas”, funded by The Coca-Cola Foundation.

The khokim of Urgench district Sharipov Frunze Ilhomovich, the head of the UN Joint Program Alisher Utemisov, the manager of relations with the government and communications of the Coca-Cola company (Uzbekistan) Nazi Aripdjanova made a welcoming speech.

During the meeting, the participants were provided with information about the goals and objectives of the project to ensure access to safe drinking water, the global and national sustainable development goals of the UN (SDGs), and the parties discussed issues of interaction within the project.

As part of the second day of the event, an assessment of the situation was carried out with the participation of residents of the Khilol mahalla, issues were discussed to identify the needs of the community, and a priority task was identified. Further, the participants were presented with a Community Development Plan (CPD), on the basis of which funds will be allocated for the construction of a water line to the mahalla by the project.

As a result of joint activities, the project will have a positive impact on improving the standard of living in the target community, in particular, on the health of project beneficiaries. Since the project will create a source of safe drinking water, it will reduce a number of waterborne diseases, thereby improving public sanitation and hygiene.

In Uzbekistan, the Coca-Cola Foundation has been working closely with UNDP for more than twelve years in the implementation of sustainable development projects. During this time, with the financial support of the Coca-Cola Foundation, UNDP has implemented projects worth more than a million US dollars. The grants were aimed at solving the problems of water shortage in remote regions of Uzbekistan, improving the financial situation of women, humanitarian aid to combat COVID-19.