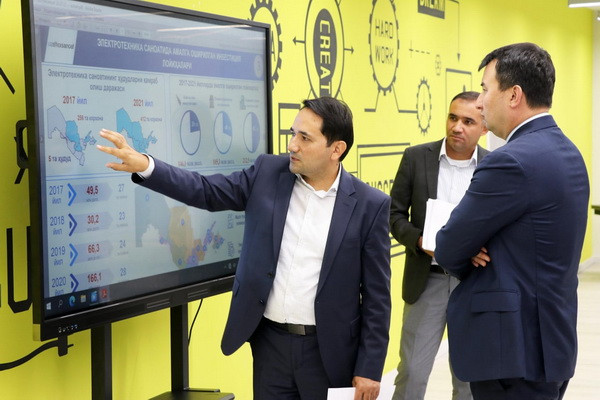 Prospects for the development of the electrical engineering industry were discussed

Prospects for the development of the electrical engineering industry were discussed

Tashkent, Uzbekistan (UzDaily.com) -- Under the leadership of the Deputy Prime Minister - Minister of Investments and Foreign Trade of the Republic of Uzbekistan Jamshid Khodjaev, a meeting was held in the building of the Uzeltekhsanoat Association to analyze the current state of the electrical industry and the main tasks for the near future.

In particular, in order to increase copper production in Akhangaran district of Tashkent region, a new Copper Cluster is being created. As part of 7 new projects worth US$834 million, additional copper processing capacities in the amount of 128,000 tons will be created.

In addition, it was noted that in order to expand the production of renewable energy sources in the country, the Cluster of Alternative Energy Sources project is being implemented in the Chirokchi FEZ of Kashkadarya region. 7 projects with a total capacity of 500 MW are being implemented here, 500 new jobs will be created in parallel. Work is underway to create an innovative research and production cluster.

Within the framework of the meeting, a complex for the production of ultra-thin copper foil was also presented, which is planned to be created jointly with the South Korean company SK NEXILIS, as well as a testing laboratory complex organized by the association Uzeltekhsanoat.

As a result of the meeting, relevant instructions were given on the timing and quality of project implementation, as well as specific tasks were set for the further development of the industry as a whole.