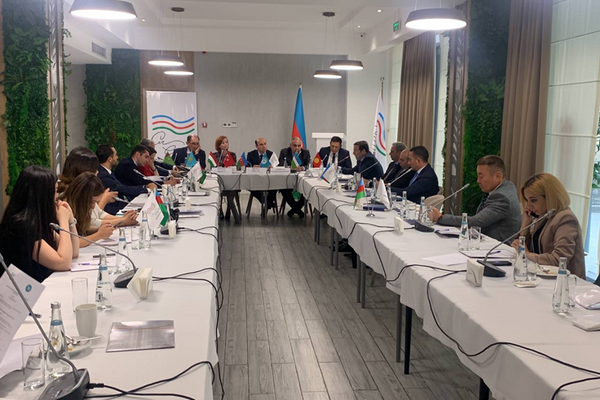 Tashkent, Uzbekistan (UzDaily.com) -- It is necessary to transform Central Asia and the South Caucasus into an important link in the trans-regional interconnectedness between North and South, West and East, Akramjon Nematov, First Deputy Director of the ISMI, said this while speaking at the Forum of Think Tanks of the Member States of the Organization of Turkic States (OTS).

According to the ISMI expert, “in November of this year, Uzbekistan will host the next OTS summit, which will play an important role in opening up new prospects for practical cooperation between the countries of the Organization. A landmark event will be the adoption of the OTS Strategy for 2022-2026, which is currently being actively worked on.”

At the same time, Akramjon Nematov emphasized, the vision of Uzbekistan in cooperation with the Organization lies in the long-term and comprehensive joint development of the economies of the countries and the large Turkic space. “Our goal is to ensure the joint prosperity of the Turkic world by ensuring the sustainable development of our common space. In this regard, it is necessary to create an interconnected space, transform Central Asia and the South Caucasus into an important link in trans-regional interconnectedness, turn our macro-region into a production and logistics hub between North and South, West and East,” explained Akramjon Nematov.

All this, according to the expert, should be developed on a new innovative digital platform, broad integration of industries, and integration of the transport and energy capabilities of the Turkic states. These efforts should eventually ensure the transformation of the regions into a competitive and self-sufficient production and logistics hub, which as a result will ensure economic growth and sustainable development of the countries of the Organization.

At the same time, Akramjon Nematov pointed out, in order to reach this qualitatively new level of cooperation, the Turkic states have all the opportunities and untapped potential. “Thus, our countries have a significant human resource, which is about 150 million people (more than 40% are young people). The OTS ranks 13th in the world in terms of GDP, which amounted to US$2.1 trillion in 2021."

Considering the priority areas of joint cooperation, first of all, the Deputy Director of the ISMI believes, it seems important to use the potential to expand trade relations. To do this, it is necessary to remove barriers to trade, expand its structure and product range. The unification and liberalization of trade relations will not only significantly increase the volume of mutual trade and transit opportunities, but will also create additional conditions for our enterprises to accelerate the production of high value-added goods, including their further entry into third markets.

“The countries of Central Asia are already actively working in this direction of activity and there are effective mechanisms of interaction that have made it possible to give dynamics to intra-regional trade. Yes, in 2021. this indicator has grown from US$12.2 billion in 2020. to US$$16.5 billion (35.2% growth). The non-regional trade of the Central Asian countries is also growing dynamically. It grew by 54% and amounted to US$167 billion,” concluded Akramjon Nematov.