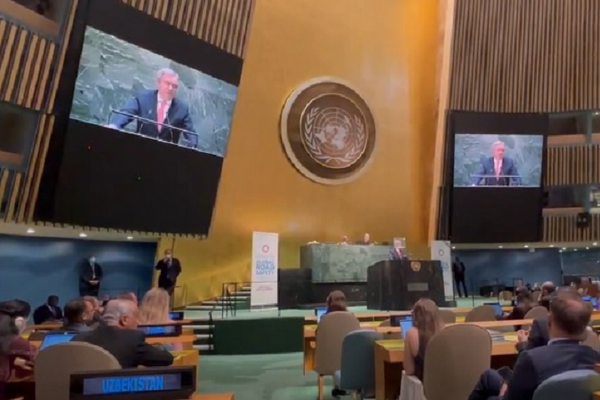 A high-level meeting of the General Assembly on this topic is being held for the first time; earlier ministerial meetings on road safety were held in the cities of Moscow (2009), Brasilia (2015) and Stockholm (2020).

Chairman of the 76th session of the General Assembly Abdullah Shahid, UN Secretary General Antonio Guterres, Assistant Director General of WHO Stuart Simonson, Special Representative of the UN Secretary General for Road Safety Jean Todt spoke at the opening ceremony of the meeting. During the plenary session, presentations were also made by delegations of member states at the ministerial level and deputy heads of departments responsible for transport, infrastructure, road safety, as well as permanent representatives to the UN in New York City.

Participants noted the importance of mobilizing political will and strengthening multi-sectoral and multi-stakeholder cooperation in this area in order to fully achieve the targets of the Second Decade of Action for Road Safety 2021-2030.

Speakers drew attention to the fact that every year about 1.3 million people die and about 50 million are injured as a result of road traffic accidents (RTAs). More than 90 per cent of deaths occur in low- and middle-income countries. It is noted that traffic accidents are the main cause of death for young people aged 5 to 29 years. In addition to the enormous human suffering, this problem costs 2-5 percent of the GDP of developing countries.

UN Secretary-General Antonio Guterres recalled that road deaths are linked to poor infrastructure, unplanned urbanization, weak healthcare systems and inequality both within and among countries.

On the first day of the meeting, a Political Declaration was adopted, which is designed to consolidate international efforts in the field of road safety to reduce the number of deaths and injuries from traffic accidents by 50 percent in accordance with the goals of the Second Decade of Action in this direction for 2021-2030.

In turn, the Permanent Representative of Uzbekistan to the UN, Ambassador Bakhtiyor Ibragimov, acquainted the participants with the large-scale reforms being carried out in Uzbekistan to radically improve the system for ensuring road safety. It was reported about the special meeting of the Government held in February by the head of state, dedicated to this issue.

The essence and content of the presidential decree adopted in April "On measures to ensure reliable human security and a sharp reduction in deaths on highways" are revealed. The launch of the nationwide program "Safe Road and Safe Pedestrian" was indicated, which, among other things, provides for:

- development of new Rules of the road, fully compliant with international standards;

- creation of a reliable new system of training, retraining and testing of drivers;

- full digitalization of the organization of traffic, the use of new management and control systems with the introduction of advanced information and communication technologies;

In conclusion, the commitment of the Uzbek side to maintaining mutually beneficial cooperation with international partners, including within the framework of the UN, on the implementation of the goals of the Decade of Action for Road Safety was confirmed.