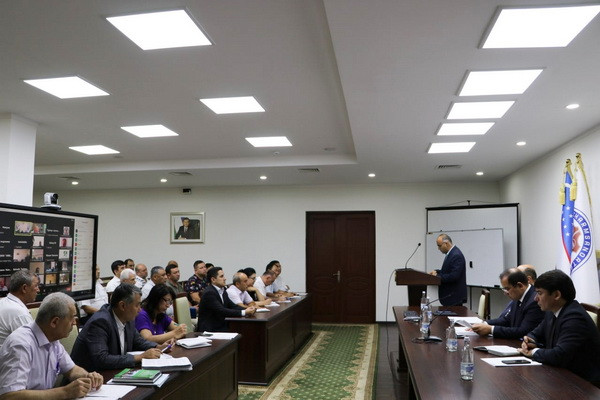 Uzcharmsanoat: industrial products worth 4.4 trillion soums were produced in 2021

Uzcharmsanoat: industrial products worth 4.4 trillion soums were produced in 2021

Tashkent, Uzbekistan (UzDaily.com) -- On 29 June this year, a regular general meeting of members of the Uzcharmsanoat Association was held. It was attended by members of the Board, heads of structural divisions of the Association and enterprises that are part of it.

During the meeting, the results of activities in 2021, the fulfillment of the tasks set in the resolutions of the President and the Cabinet of Ministers regarding the development of the leather and footwear and fur and fur industries were considered. In addition, priority tasks for 2022 were considered.

In particular, it was noted that by the end of 2021, all the established targets for production, investment, localization and export in the leather and footwear and fur and fur industries have been achieved.

Also in 2021, investments worth US$125.4 million (105.8% of the forecast) were disbursed from all sources in 28 projects of the state investment program, of which foreign direct investment was US$56.08 million (11 projects).

By the end of last year, 112 projects were launched for a total of US$202.0 million. 9 of them in the amount of US$36.0 million were created as part of the state investment program. In addition, 103 regional projects were implemented through the development of US$166.0 million. As a result, 11,120 new jobs were created.

The implemented projects allowed creating of additional capacities. In particular, modern enterprises for the slaughter of 770 thousand heads of cattle, the production of 500 million square meters of leather, 26.5 million pairs of various shoes and shoe soles, 3.5 million pieces of leather goods, 16.1 tons of glue, EVA granules and liquid PVC, 8.7 thousand tons of woolen products and 440 thousand pieces of astrakhan products.

During the meeting, it was noted that in 2021, through the implementation of 38 projects, products worth 74 billion soums were produced as part of the localization program.

As for exports, the figures here also exceeded the forecast, amounting to US$420.6 million (+0.3%). The geography of deliveries last year expanded, including such countries as Austria, France, Germany, the United Arab Emirates, the USA, Israel and Egypt. Thus, the number of countries importing Uzbek leather and footwear, fur and fur products has reached 40.

The meeting also identified priority tasks for 2022, including, unconditional enforcement of the resolution of the President of the Republic of Uzbekistan “On additional measures to support the production of finished products in the leather, footwear and fur industry”. The importance of rigorously achieving targets for production, investment and exports was also noted.

It was noted at the meeting that on 25-27 May in Tashkent, in cooperation with the Ministry of Investments and Foreign Trade, the UzCharmExpo-2022 exhibition was effectively organized, in which 70 foreign companies and organizations from 30 countries of the world took part. More than 4,000 items of products from 100 local enterprises were presented within the framework of the exposition. The event has turned into a successful business platform for signing export contracts worth more than US$50 million and concluding initial investment agreements worth more than US$35 million.

At the same time, issues were considered and tasks were set for organizing the 13th International Exhibition-Fair of Leather, Shoes, Leather Goods, Fur and Woolen Products "UzCharmExpo-2022", which will be held on 12-14 October 2022.

Based on the above, the following tasks are defined:

- organization of direct business cooperation with all enterprises producing and exporting leather and footwear and fur products;

- taking measures for the immediate solution of problems that have arisen in the production process for all enterprises in the industry;

- attraction of foreign investments and modern technologies to the enterprises of the industry;

- organization of exhibition fairs for industry enterprises in the country and abroad;

- registration and certification of products of industry enterprises in foreign countries;

- continuation of work to provide ongoing assistance to enterprises in terms of organizing trading houses for the sale of products in foreign countries.

On all issues on the agenda, the reports of the association’s specialists were heard, and answers were given to all questions of the enterprises. Appropriate decisions were made on more than 10 issues.