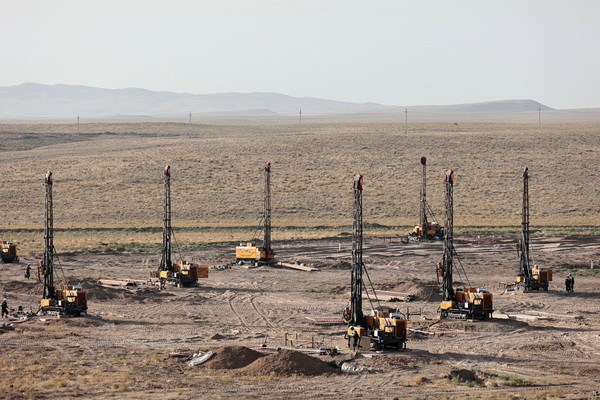 Tashkent, Uzbekistan (UzDaily.com) -- Sanoat Energetika Guruhi (SEG), together with Kontiki-Exploration, discovered the Yangi Uzbekistan, the largest ultra-viscous oil and bitumen field in Uzbekistan, in the Zerafshan depression. The field will become one of the most high-tech in Central Asia.

The start of the project implementation dates back to 15 May 2021, when the drilling of the first exploration well was started. Drilling operations are carried out on the border of Samarkand and Navoi regions, the depth of appraisal and development wells is from 400 to 750 meters. In the course of drilling, layers of gravelstones and sandstones of the Albian, Cenomanian and Turonian ages were uncovered. All of them turned out to be saturated with oil, extra-viscous oil and bitumen.

Due to the high viscosity, the field will become one of the most high-tech not only in the Republic of Uzbekistan, but also in the Central Asian region. For the production of hydrocarbons by SEG, a number of international oilfield services companies have already been involved in the project, including:

O’NEILL Industries (USA) – a technology for steam cycling well treatment, which provides for the generation and injection of steam together with carbon dioxide, nitrogen and surfactants.

“The discovery of the Yangi Uzbekistan field is part of Sanoat Energetika Guruhi’s strategy to increase oil production to 1.6 million tons by 2030 as part of the execution of the order of the Cabinet of Ministers of Uzbekistan. To implement projects of this scale, we will attract the best contractors who can work with similar oil. Today we have been able to increase production from 425 to 500 thousand tons per year. The development of the Yangi Uzbekistan field is guaranteed to lead to a significant increase in this figure. Thus, Uzbekistan in the near future will be able to reduce imported crude oil and produce processed products from its own raw materials,” said Shokir Faizullaev, CEO of Sanoat Energetika Guruhi.

“Not only the largest field has been discovered at shallow depths, but also a new oil-bearing area, where we can find even more liquid oil deeper. In addition, in Uzbekistan there are a number of potentially interesting intermountain and foothill depressions in which it is necessary to search and find hydrocarbons,” said Sergey Astakhov, director of Kontiki Oil Prospecting Company LLC.

Currently, prospecting and exploration work is underway to determine productive thicknesses and delineate bitumen and oil deposits, as well as pilot work to determine the extraction method.