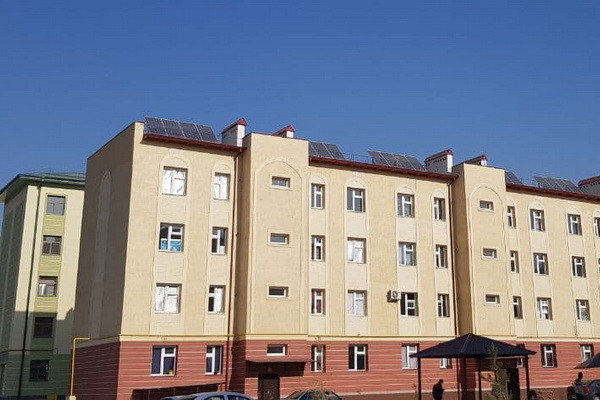 Tashkent, Uzbekistan (UzDaily.com) -- Continuous population growth leads to huge consumption of energy resources, which in turn leads to serious consequences for climate change. Two-thirds of the world’s greenhouse gas emissions come from the production and use of energy resources. Global warming is not just an increase in average temperature, it leads to an imbalance in the weather on the entire planet, and this gives rise to a variety of natural disasters.

Against the backdrop of these risks, many countries are actively moving towards a clean, smart and secure energy system through the development and implementation of energy-saving technologies in the design and construction of energy efficient and low-carbon buildings.

The transition to Energy Efficient (EE) and Low Carbon (LC) construction varies across countries. From 2019 in the countries of the European Union (EU), all new houses built must comply with passive house building standards, and from 2021 these standards apply to other buildings. There are already several thousand low-energy houses in Europe, and this number continues to grow.

The main concept of a passive house is to minimize the heat loss that normally occurs in buildings through walls, roofs and windows, through high-quality thermal insulation of the outer surfaces of the building walls, triple-glazed windows, airtight building envelopes and a heat recovery ventilation system. In a "passive" house, solar energy, internal heat sources, as well as heated air supplied through the ventilation system (recuperation) are used for space heating.

Improving energy efficiency is also possible in buildings built in the last century without observing energy-saving technologies. So, in Berlin (Germany), a construction company overhauled an eight-story building built in the 1950s. The reconstruction project included the renewal of ventilation systems, insulation of facade walls, as well as the installation of a solar panel complex on the roof and facade of the building. Energy from solar panels is stored in the battery system and is used to supply electricity to apartments, heat water and the heating system. Thanks to new construction technologies and materials, heat consumption in apartments has been reduced to 85%, independent heat supply to the house is provided by 100% and the necessary electricity by 50%.

In the Netherlands, the government is in turn improving the energy efficiency of existing buildings through the Energiesprong program launched in the country in 2010. The program upgrades existing buildings (in less than 10 days) to higher energy efficiency standards, after which they become buildings with zero energy consumption. Zero energy consumption is the ability of a building to produce on its own the entire amount of energy necessary for the life support of residents. Pilot projects for the modernization of buildings within the framework of this program have already been launched in the UK, Canada, the USA, and France.

According to the European energy performance standard EPBD (European Energy Performance of Buildings Directive), all buildings under construction in the EU must meet the performance of buildings with minimal or no energy consumption. Also, EU energy efficiency certificates are mandatory and must be presented to tenants and buyers. A number of studies across Europe, including Ireland, the Netherlands, Germany and Sweden, show that the rent or sale price of energy efficient homes is higher than conventional ones.

Uzbekistan has become the first member state of the Global Green Growth Institute (GGGI) among the CIS countries and plans to implement joint projects with it to support and stimulate sustainable economic growth through the development of a "green economy" in the face of climate change.

In addition, starting from 2017, Uzbekistan is also actively implementing the transition to green building. Ensuring environmentally safe living conditions in rural areas is carried out, among other things, within the framework of a joint UNDP project in Uzbekistan with the Ministry of Construction of the Republic of Uzbekistan with grant support from the Global Environment Facility (GEF) “Assistance in the development of energy-efficient rural housing construction in Uzbekistan”. The first component of the project promotes the use of green mortgage lending by banks in Uzbekistan to massively increase demand for EE and LC housing.

As part of the third component of the UNDP / GEF Project and the Ministry of Construction for 2022, it is planned to develop a new construction regulatory document “Passive House” and a manual for it. It should be noted that one of the first passive houses in Uzbekistan was built in 2011 on the banks of the Charvak reservoir according to the project of Associate Professor of the Tashkent Institute of Architecture and Civil Engineering Mansur Zakhidov.

Despite the active adoption by the state of measures to introduce "green" strategies in the economy and construction, it is necessary to raise awareness of the population and increase its participation in the development and use of energy efficient solutions. Anyone who plans to renovate a dwelling can take measures for thermal modernization and energy efficiency at home. These measures include high-quality thermal insulation of walls, roof (ceiling) and floor, replacement of windows and doors. Owners of private houses can also install an innovative heating system with the ability to control the temperature in the room.

The project also launched the construction of a demonstration pilot house with almost zero energy consumption in the Yoshlik mahalla in the city of Nurafshan in Tashkent region. Zero energy consumption will be achieved by increasing the thermal insulation of the building using insulating materials with high heat transfer resistance. Almost the entire amount of electricity in this house will be produced by solar panels installed on the roof of the building.

In addition, the project plans to contribute to the energy efficiency of selected residential areas of Yangi Uzbekistan, the construction of which will begin in 2022. When building these houses, design solutions will be used taking into account the climatic features of each region.h