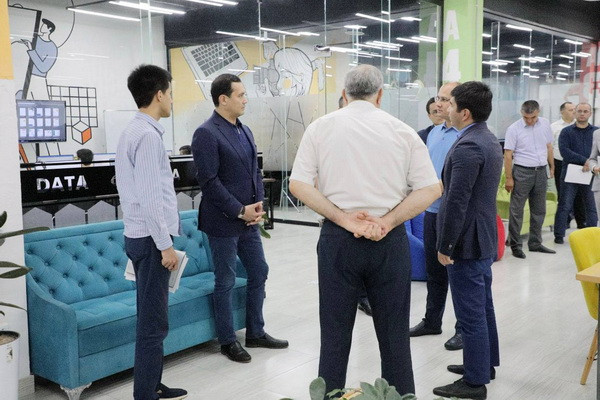 Measures to stimulate the industrial development of Khorezm region were considered

Measures to stimulate the industrial development of Khorezm region were considered

Tashkent, Uzbekistan (UzDaily.com) -- On 28 June this year, the Government Commission on Foreign Trade, Investments, Development of Local Industry and Technical Regulation under the leadership of the Deputy Prime Minister - Minister of Investments and Foreign Trade of the Republic of Uzbekistan Sardor Umurzakov and composed of leaders ministries, departments, industry associations and commercial banks left for Khorezm region to study the current state of the socio-economic development of the region and develop measures to further stimulate it.

Members of the Commission traveled to enterprises and industrial facilities, communicated with entrepreneurs and exporters, discussed issues related to production and export activities, and also considered the problems that private sector representatives face in practice.

The results of the analysis were studied at a meeting held in the format of a videoconference with the participation of members of the Commission and heads of local authorities of districts and cities of the region.

As part of the agenda of the meeting, the implementation of the regional investment program was considered: this year it is planned to implement 698 investment projects in the region worth 6.4 trillion soums, which will create about 15.3 thousand new jobs. The activities of production facilities that have already been put into operation, as well as the progress of work on the formation of new investment projects in priority sectors for the region, were studied.

The leadership of the Commission pointed out the need to increase the share of projects in the field of industry and intensify the activities in this direction of the “project groups” created in the region in conjunction with local authorities and industry leaders assigned to districts and cities of the region. It was instructed to concentrate efforts on identifying "points of growth" in the context of districts and cities of the region and develop new investment proposals in the most promising sectors in order to implement high-tech industrial projects focused on the production of products with high added value.

In addition, issues of supporting export activities were considered. Responsible leaders reported on the progress of work to support local producers and exporters, meaning practical assistance in solving existing problems and developing measures to increase the export potential of the region.

As a result of the meeting, the heads of ministries, departments, commercial banks and local authorities received additional instructions and instructions for the high-quality and timely implementation of the tasks set. In the near future, members of the Commission will continue to work in the Khorezm region with the aim of a deeper analysis of the situation on the ground and the development of a strategy to stimulate the industrial and economic development of the region.