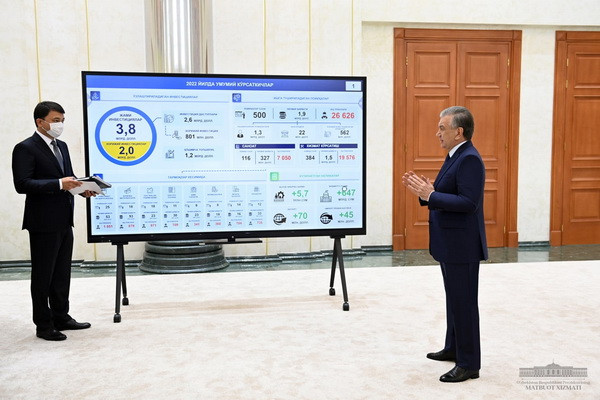 Tashkent, Uzbekistan (UzDaily.com) -- On 27 June, President Shavkat Mirziyoyev got acquainted with the presentation of investment projects implemented in the city of Tashkent.

According to the plan, over 500 projects with a total investment of almost US$4 billion are planned to be implemented in the city of Tashkent. To date, US$1.5 billion has been disbursed within the framework of projects. 71 projects worth US$120 million have been launched. More than 5,000 jobs have been created. Another 450 projects worth US$2.3 billion are being developed.

The Head of the state, noting the insufficiency of the indicators achieved in the first half of the year, gave instructions on solving the problems of delayed projects, expanding the attraction of investments.

During the presentation, the progress of work in Yangikhayot Industrial Technopark was also considered.

The creation of the Technopark was determined by the decree of the President of February 4, 2021. 210 hectares are allotted for this complex. A master plan has been developed and the construction of engineering and communication networks has now begun.

The President noted the economic and social significance of projects.

“It is impossible to achieve results without creating conditions for entrepreneurs. This Technopark should become a comfortable platform for entrepreneurs. It is necessary to pay attention to projects that will serve to import substitution and create the greatest number of jobs”, Shavkat Mirziyoyev said.

110 hectares were sold by auction on the territory of the Technopark in the first stage. It will house projects for the production of kitchen appliances, confectionery and textiles, sanitary ware, polyethylene and metal products. It is planned to create 20,000 jobs at the enterprises that will be created in the Technopark.

There are ample opportunities in the service sector in Tashkent. Over the past five months, 183 thousand jobs have been created within the framework of 5.5 thousand projects.

The Head of the state noted that the demand and opportunities of the population are growing, and therefore it is necessary to develop services on a large scale. Instructions were given on profile training for young people, improving the quality of services and increasing employment.