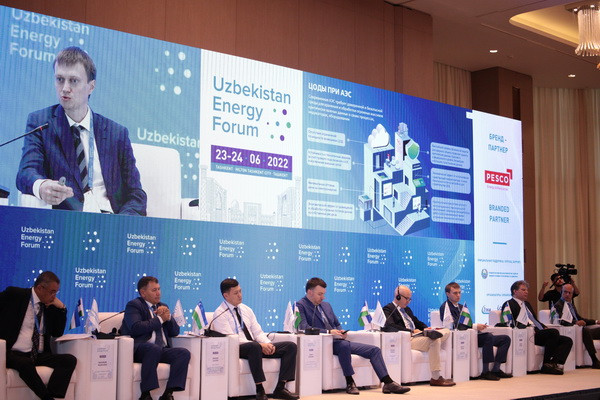 Within the framework of the Energy Forum of Uzbekistan, experts discussed the prospects for nuclear energy

Within the framework of the Energy Forum of Uzbekistan, experts discussed the prospects for nuclear energy

Tashkent, Uzbekistan (UzDaily.com) -- The panel session "Nuclear energy - a positive environmental effect and an impetus to economic growth" was held on 24 June as part of the Energy Forum of Uzbekistan - UEF 2022. The event was organized by the Ministry of Energy of the Republic of Uzbekistan to exchange views, strengthen international cooperation in the fuel and energy industry and further integration of Uzbekistan into the energy system of the Central Asian region.

Bahrom Mansurov, First Deputy General Director of the Uzatom Agency, addressed the session participants with a welcoming speech. Noting the unique advantages of nuclear energy over all other methods of generating electricity, B. Mansurov wished fruitful work to all participants of the event.

Bekhzod Talipov, Head of the Department for Radiation and Nuclear Safety of the State Committee for Industrial Safety, briefed the participants on the efforts being made by the regulator to lay the foundations for the safe development and operation of nuclear energy in the country.

Elena Pashina, Marketing Director of Rusatom Overseas, spoke about how Rosatom is developing the hydrogen energy sector. “We are working on solutions in the field of turnkey production of environmentally friendly hydrogen for industrial enterprises, the supply of hydrogen equipment, we are developing engineering competencies, including for the creation of hydrogen refueling complexes. For Rosatom today, hydrogen energy is one of the priority areas of scientific and technical development, and we will be happy to consider various opportunities for cooperation with our Uzbek partners in this area,” said E. Pashina.

Nikolai Struev, Head of the Department of Financial Planning, Control and Analysis of the Rosenergoatom Concern, also spoke at the session, sharing his experience in developing digitalization based on the competencies and capacities of the Russian Rosatom; Frédéric Chenau, Development Director, Assystem, Gabor Senes, Regional Sales Director

Nuclear New Build, GE Steam Power and Lorenzo Santini, Director of Development of the Nuclear Industry at Worley, who noted the important role of nuclear energy in solving the challenges facing humanity related to the growing demand for electricity and, at the same time, stringent climate requirements.

The session was moderated by Bakhtiyor Ergashev, director of the Center for Research Initiatives "Ma’no".