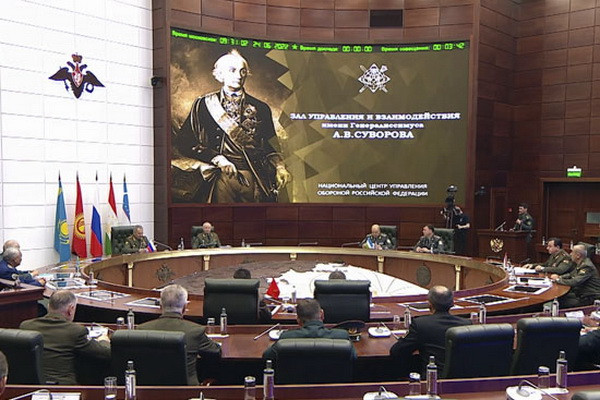 For the first time, a meeting of defense ministers of Russia and Central Asian countries takes place in Moscow

For the first time, a meeting of defense ministers of Russia and Central Asian countries takes place in Moscow

Tashkent, Uzbekistan (UzDaily.com) -- For the first time, a meeting of the defense ministers of Russia and Central Asian countries was held in Moscow. The topic for discussion was the situation with the growing activity of international terrorist organizations in Afghanistan. This is reported by the Department of Information and Mass Communications of the Ministry of Defense of the Russian Federation.

“I am grateful for the support of our initiative to meet the heads of the defense departments of the states of Central Asia and Russia,” said the Minister of Defense of the Russian Federation, General of the Army Sergei Shoigu.

“The reason for this was the growing military danger in Central Asia, the activation of international and regional terrorist organizations in Afghanistan, primarily the Islamic State of Iraq and the Levant and Al-Qaeda,” he added.

The meeting was attended by the Minister of Defense of Russia, Army General Sergei Shoigu, as well as the heads of the military departments of Kazakhstan, Kyrgyzstan, Tajikistan and Uzbekistan - Ruslan Zhaksylykov, Baktybek Bekbolotov, Sherali Mirzo and Bakhodir Kurbanov, respectively. This is the first time the meeting has been held in this format.

At the meeting, Army General Sergei Shoigu said: "The leaders of international terrorists consider Afghan territory as a base for infiltrating neighboring countries and creating an extensive network of jihadist underground, replenished, among other things, by transferring militants from hot spots."

The head of the Russian military department specified that the ideology of religious radicalism is spreading in the region, drug trafficking and cross-border crime are on the rise. According to him, it is necessary to strengthen coordination between the law enforcement agencies of the states of Central Asia and Russia to counter international terrorist organizations in the region and form common approaches to combating these structures.

Sergei Shoigu expressed hope that the trusting dialogue between the countries that has developed over the years will contribute to the development and improvement of interaction.