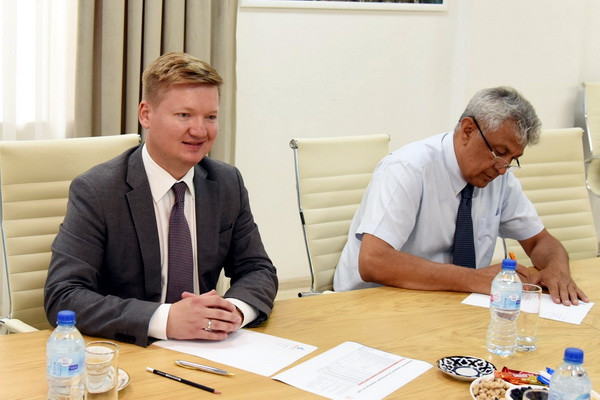 Tashkent, Uzbekistan (UzDaily.com) -- Chairman of the Board of Uzbekneftegaz Mekhriddin Abdullayev received Anton Stepanov, head of the business area for sales of the fuel and energy complex  in the CIS countries of PJSC TMK (Pipe Metallurgical Company).

Founded in 2001, PJSC TMK is now one of the leading steel pipe manufacturers in Russia and one of the top three global leaders in the pipe business.

During this party, issues of further deepening bilateral cooperation and the current state of execution of existing contracts for the supply of tubular products necessary for exploration and production wells were discussed. The need for timely and high-quality execution of contracts between the companies and the provision of optimal prices for products under future contracts was also noted.

Anton Stepanov, Chairman of the Management Board, Head of the Fuel and Energy Sector Sales Business at TMK, informed about the large-scale work carried out by the company in the field of drilling in order to increase reserves and volumes of recoverable products.

It was noted that mutually beneficial partnerships between the two companies are of strategic importance for achieving the goals set to provide the economy of the Republic of Uzbekistan with energy resources, the heads of the two companies also agreed on further cooperation.

It should be noted that the drilling of new oil and gas wells is inextricably linked with pipeline products supplied on an imported basis. In this direction, Uzbekneftegaz JSC has carried out significant work on the supply of imported pipeline products.