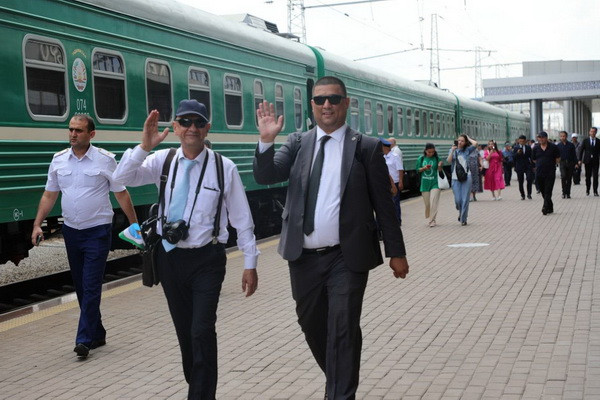 Tashkent, Uzbekistan (UzDaily.com) -- On 21 June, a solemn ceremony was held to mark the meeting of the first passenger train in the last 30 years in the direction of Dushanbe - Tashkent. It should be underlined that passenger transportation by rail between Uzbekistan and Tajikistan was suspended in the early 1990s.

An agreement to resume passenger traffic was reached at the beginning of June this year, during the official visit of the President of Tajikistan Emomali Rahmon to Uzbekistan. Then the leaders agreed to form new transit corridors and create a modern logistics infrastructure, increase air, rail and bus transportation.

The first passengers of the passenger train, called "Friendship Caravan", were about 200 people, including the leadership of the Ministry of Transport of the Republic of Tajikistan and the State Unitary Enterprise "Rohi ohani Tochikiston", members of the People’s Democratic Party of Tajikistan, entrepreneurs, railway veterans, as well as representatives of the media Tajikistan and foreign correspondents.

At the solemn ceremony, it was noted that this direction, which serves as a kind of bridge of friendship between the fraternal peoples. Establishing passenger railway communication will serve to restore ties between our peoples and further strengthen mutually beneficial relations.

A welcoming speech at the solemn ceremony was made by the Deputy Minister of Transport of the Republic of Uzbekistan A. Muminov, where he emphasized the importance of the agreements being implemented between the two countries.

– Thanks to the close-knit and active work of the two railway administrations, in a short time it was possible to resume passenger traffic on the Dushanbe-Tashkent-Dushanbe route. It is not for nothing that our Tajik friends symbolically named this train the “Caravan of Friendship”. As you know, from ancient times, caravans served as an alliance between peoples. They spiritually, economically and politically connected neighboring states. We can say with confidence that a train with such a majestic name will serve as an alliance to achieve common goals between fraternal peoples.

During the solemn meeting, Uzbek and Tajik railway workers, honored guests, and passengers noted that the trip was safe and comfortable, and noted that excellent conditions for passengers were created at the railway stations of our country.

“Today we are witnessing a historic event,” the head of the passenger train No. 301/302 Dushanbe-Tashkent-Dushanbe Mahodbek Diloev shares with us. - I was still very young, I had just started my career on the railway, when the movement of passenger trains in this direction stopped. For 27 years now, my fate has been inextricably linked with passenger transportation. I am proud of my profession. And today there is incredible excitement. As we know, the restoration of movement in this direction was expected for a very long time. People’s joy is also evident. Throughout the trip, one could see that the mood of the passengers was in high spirits.

After the solemn event, a tour of Tashkent was organized for the guests. Tourists visited the sights of the largest capital of Central Asia and highly appreciated the creative work done in our city in recent years. And at 16:15 from the railway station "Tashkent-Central" "Caravan of Friendship" set off on the return journey. It should be noted that the passenger train Dushanbe-Tashkent covered 916 km along the route Dushanbe-Kudukli-Sarasiya-Kumkurgan-Darband-Dekhkanabad-Karshi-Samarkand-Jizzakh-Gulistan-Tashkent. Travel time was 21 hours.