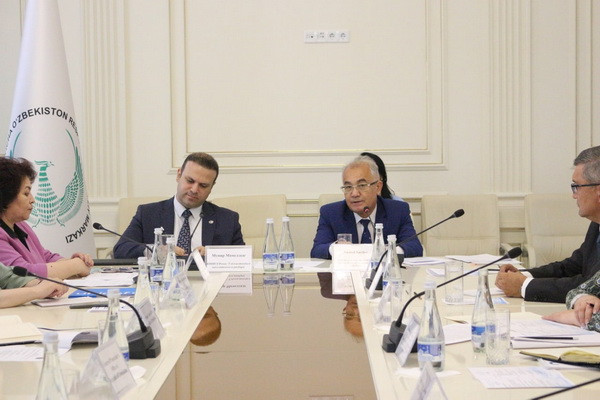 Director of the National Center for Human Rights Akmal Saidov and Head of the UNICEF Office in Uzbekistan Munir Mammadzade addressed the participants of the event with a welcoming speech.

The participants of the “round table” highly appreciated the proposal of the President of the country Shavkat Mirziyoyev on the need to enshrine the idea of “Uzbekistan is a social state” in the Constitution. Such a proposal of the head of state was announced at a meeting with members of the Constitutional Commission on 20 June.

The welfare state aims to create decent living conditions for everyone, where no one is left without attention, one on one with their problems. Therefore, it is proposed to reflect in the Basic Law the obligations of the state to provide the population with housing, strengthen the economic and spiritual foundations of the family, create all conditions for ensuring the interests and full development of children, support people with disabilities, protect human health and the environment.

The initiatives of the President of the Republic of Uzbekistan on the protection of the family, children and youth received special support from the participants of the round table, in particular, that “the care of the state for men and women, families and children, youth and the elderly, persons with disabilities, all people, whether in the country or abroad, shall be enshrined in the Constitution.”

As Akmal Saidov noted in his welcoming speech, for Uzbekistan, where 40% of the population are children, ensuring and protecting the rights of children in all respects is of fundamental importance. Proof of this are more than 40 adopted legislative and legal acts to ensure the rights of the child, on the basis of which a legal mechanism has been created to promote the spiritual, intellectual, physical and moral development of children.

“The possibility of including child rights issues, such as the principle of the best interests of the child, non-discrimination, the prohibition of violence, abuse, neglect and exploitation of children, the right to participation and access to guaranteed basic services and to justice, are relevant everywhere and always, especially in the context of Uzbekistan, where more than a third of the total population are children,” said Munir Mammadzade, head of the UNICEF Representative Office.

During the meeting, a comparative analysis of the provisions on the rights of the child in the Constitutions of 47 states was presented. Conor O’Mahony, Special Rapporteur for the Government of Ireland on Child Protection, made a presentation on this topic. According to the international expert, in the process of constitutional reforms, it is important to hold broad discussions with the participation of representatives of youth organizations and the youth themselves.

The round table was attended by members of the Senate and deputies of the Legislative Chamber of the Oliy Majlis of the Republic of Uzbekistan, representatives of the Supreme Court, the Prosecutor General’s Office, the Ministry of Preschool Education, the Ministry of Public Education of the Republic of Uzbekistan, the Institute of State and Law under the Academy of Sciences of the country, the Center for Sustainable Development, the National Center for human rights.

Participants made specific proposals for further steps in constitutional consolidation of provisions on the rights of the child in the Constitution of the Republic of Uzbekistan.