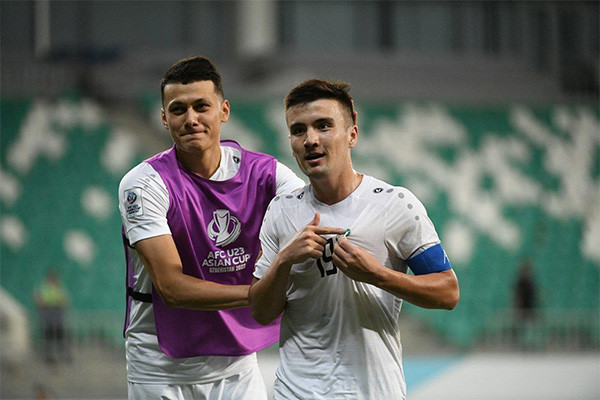 Tashkent, Uzbekistan (UzDaily.com) -- Second half goals from Jasurbek Jaloliddinov and Husain Norchaev secured Uzbekistan a 2-0 win over Japan in their AFC U23 Asian Cup™ Uzbekistan 2022 semi-final on Wednesday.

The victory means 2018 champions Uzbekistan - who will play Saudi Arabia in the final - are one match away from becoming the first team to win the AFC U23 Asian Cup twice.

The semi-final at the Bunyodkor Stadium was played behind closed doors following several incidents during Uzbekistan’s quarter-final against Iraq, with only up to a maximum of 500 Japanese fans allowed into the stadium.

However, that didn’t stop Uzbekistan from signalling their intentions early with Norchaev firing from distance within two minutes of the match.

Japan slowly found their footing and began creating opportunities, mostly through set-pieces, with their first sight on goal in the 14th minute when Joel Fujita latched onto a stray ball following Yuito Suzuki’s corner kick, but the skipper’s grounded effort missed the left post by mere inches.

The 2016 champions came close again four minutes later from a short corner kick play that saw Hijiri Kato curl in a cross deep into the area, but a sliding Joel Fujita couldn’t connect.

Uzbekistan almost found a breakthrough in the 32nd minute when Hojimat Erkinov intercepted a pass and surged into the box, before pulling back for Ulugbek Khoshimov, whose shot was foiled by Anrie Chase.

The end to end action continued with Erkinov shooting wide from point-blank range, before Shota Fujio forced a save from goalkeeper Vladimir Nazarov at the other end moments later as both sides entered the break goalless.

Timur Kapadze’s Uzbekistan came out fighting in the second half as they heavily pressured the Japanese backline, forcing goalkeeper Zion Suzuki to deny Norchaev and Jaloliddinov’s efforts in the 49th and 53rd minutes respectively.

But there was no stopping Uzbek skipper Jaloliddinov on the hour mark when he was left with enough space to let loose a crackling strike from over 30 yards out to beat an outstretched Suzuki to break the deadlock.

Japan tried to push back in search of the equaliser, but Uzbekistan’s disciplined defence kept most of the action away from Nazarov.

Norchaev then sealed the win for Uzbekistan a minute from time when he outmuscled Seiya Baba to collect Abbosbek Fayzullaev’s cross before dashing down the centre to calmly beat Zion Suzuki and seal his team a place in Sunday’s final.