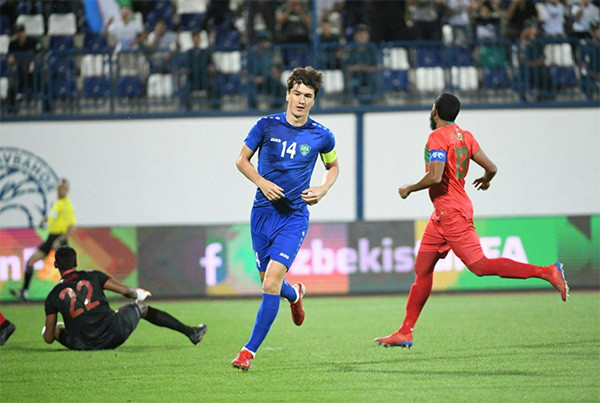 Uzbekistan cruised to a 4-0 win over Maldives

Uzbekistan cruised to a 4-0 win over Maldives

Tashkent, Uzbekistan (UzDaily.com) -- Uzbekistan cruised to a 4-0 win over Maldives in their AFC Asian Cup 2023™ Qualifiers Final Round Group C tie on Saturday.

Eldor Shomurodov scored a hat-trick with Farrukh Sayfiev adding one in another impressive performance by Uzbekistan before their fans at the Markaziy Stadium.

The win leaves Uzbekistan with six points with the White Wolves to play Thailand on Matchday Three to decide the group winners, while Maldives and Sri Lanka will play for pride.

Uzbekistan defeated Sri Lanka 3-0 in their opener, while Maldives had suffered defeat  against Thailand with a similar scoreline.

The Central Asian side could have doubled their lead in the 22nd minute when Shomurodov dribbled inside the area before sending a delightful pass to Jaloliddin Masharipov, who failed to hit the target after being closed down by the Maldives defenders.

Maldives held their own for the remainder of the half as Uzbekistan took a 1-0 lead going into the break.

The onus was on Maldives to find their way back into the game but Uzbekistan showed their class in the 52nd minute with Shomurodov changing direction on the turn after collecting Masharipov’s through ball before firing an unstoppable drive from distance past Faisal.

Uzbekistan scored their third goal of the evening in the 80th minute after a deep-lying Shomurodov pounced on another mistake by Maldives, this time by Haisham Hassan’s back pass, before scoring a low drive into the back of the net.

With Uzbekistan in overdrive, Maldives suffered more woes in added time with Oston Urunov scoring their fourth, finishing off Sayfiev’s cross from the left to cap of an impressive victory.