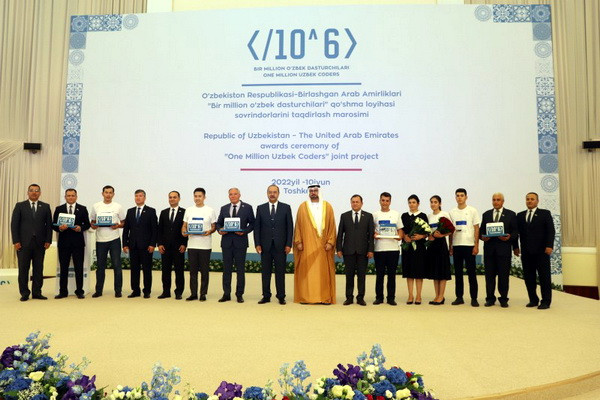 Tashkent, Uzbekistan (UzDaily.com) -- On 10 June, an award ceremony was held in Tashkent dedicated to the results of the joint project of the Republic of Uzbekistan and the United Arab Emirates "One Million Uzbek Coders" (OMUC).

The OMUC project is a free online platform. It was launched with the aim of teaching the population the skills of programming and working with digital technologies. The platform covers the four most popular areas: data analytics (Data analysis), android development (Android), front-end development and full-stack development.

To date, the total number of students registered to study in the One Million Uzbek Coders program is 2,503,060 people, of which:

As part of the event, videos were shown about the results of the project for the entire period of implementation and the stories of successful graduates.

The awards ceremony took place in the following categories:

"The most active region" - Khorezm region won in the nomination;

"The most active university" - the Urgench branch of the Tashkent University of Information Technologies won in the nomination;

In the nomination "The most active school" the 9th secondary school from Kashkadarya region received awards;

"The most active student" - a student of the Tashkent University of Information Technologies Farrukh Saliev;

"The most active family" was recognized as the Kholov family.

In 2021, for the graduates of One Million Uzbek Coders, in partnership with the United Arab Emirates, 3 competitions were held with a total prize fund of US$100,000 - the Sports Programming Championship, the Open Data Challenge and the Students Cup.

Among the active participants of the project, an online contest with a prize fund of $6,000 was also held, in which 12,000 people took part. In 2021, 100 best computer science teachers of secondary schools were awarded, who completed advanced training courses as part of the One Million Uzbek Coders project. This competition is also taking place this year.

In addition, within the framework of One Million Uzbek Coders, 7 qualifying rounds were held and the owners of 250 Nanodegree grants for IT education were determined.