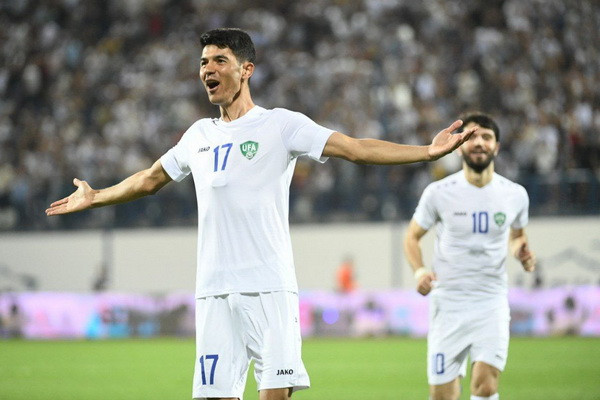 Uzbekistan came into the contest at the Markaziy Stadium in Namangan with head coach Srecko Katanec fielding a strong side captained by Eldor Shomurodov alongside playmaker Jaloliddin Masharipov.

Uzbekistan started confidently with Azizbek Amonov flashing a half-volley across the face of goal in the third minute after pouncing on a deflection inside the box.

Sri Lanka stayed in the game, keeping Uzbekistan at bay thanks to some wonderful goalkeeping by captain Sujan Perera, who produced a fine stop to deny Farrukh Sayfiev’s header in the 20th minute, before the shotstopper foiled Shomurodov’s effort moments later.

There was no denying Uzbekistan though, as they finally beat Perera in the 36th minute when Masharipov curled in a beautiful free-kick.

Amonov then tried to catch Sri Lanka off guard in the 40th minute but Perera was at his best to stop the forward’s long-range effort with a diving save.

Uzbekistan doubled their lead three minutes into the restart with Dostonbek Khamdamov bending his free-kick over the Sri Lanka wall and past Perera.

Katanec’s men scored their third goal of the evening courtesy of Farrukh Sayfiev’s effort from inside the box after the defender pounced on a poor clearance from Sri Lanka.