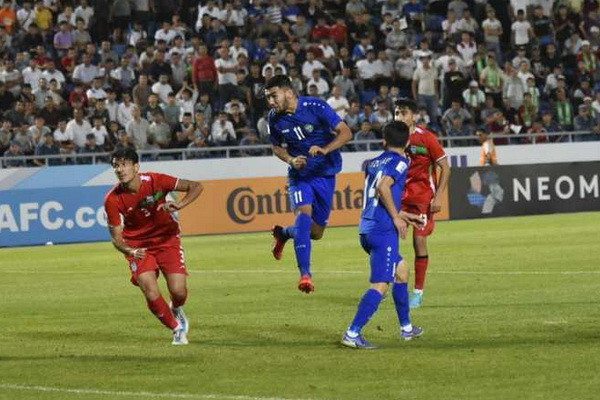 Tashkent, Uzbekistan (UzDaily.com) -- Uzbekistan head coach Timur Kapadze’s gamble to give 11 fresh players the opportunity to shine paid off when they drew 1-1 against the Islamic Republic of Iran in their final Group A encounter at the Markaziy Stadium on Tuesday.

With their quarter-final ticket already punched, Kapadze tested the mettle of his previously unused players in a match where IR Iran came out firing on all cylinders.

“We really wanted to win but it was a difficult match because our opponents needed to win to survive. The draw is not bad as it was important that we go into the next round as the first placed team in Group A,” said Kapadze.

“I have 23 players who have the same abilities. I gave what you normally call the ‘bench players’ time to play and we will assess their performances and abilities. I don’t have important players, everyone must play their part and those who are selected, must play their best.”

Uzbekistan rounded off their group stage campaign by impressively scoring eight goals and conceding one, putting them in good stead against quarter-final opponents Iraq on Saturday.

Their final group match was watched by over 19,000 spectators and Kapadze has urged the passionate local fans to continue their support as Uzbekistan aim to become the first team to win the AFC U23 Asian Cup™ twice following their 2018 triumph.

“We are glad to play in Qarshi, thank you to the fans who supported us. The atmosphere was amazing. It was good to see how my players reacted and performed in this situation. We look forward to the next match, it will be another interesting game against Iraq,” he added.

Iran head coach Mehdi Mahdavikia was left to reflect on their early exit in the campaign, admitting that the 2-1 defeat against debutants Turkmenistan hurt their chances.

“We are out of the tournament because we lost against Turkmenistan. That’s a fact,” said Mehdi. “But today was a good game. If we had taken our chances, we could have won the match but now we look back and see how we can improve.

“There are two problems that we need to overcome. First, we need to score and our players need to improve on their fitness. Many of them do not play in the professional league so this is one problem we must solve before the next competition.”