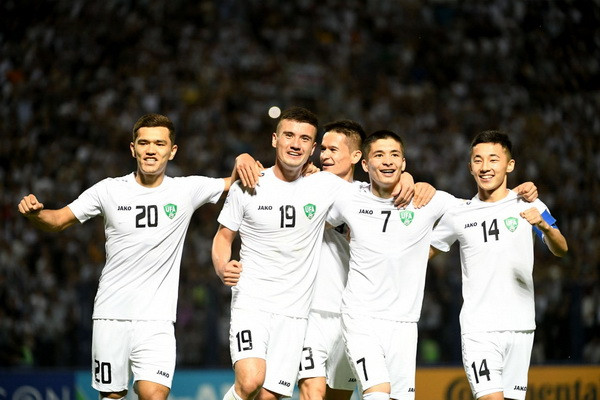 Tashkent, Uzbekistan (UzDaily.com) -- Uzbekistan were at their best as they defeated Qatar 6-0 to book their spot in the AFC U23 Asian Cup™ Uzbekistan 2022 quarter-finals on Saturday, the-afc.com reported.

The 2018 champions produced a sizzling show before their adoring fans at the Pakhtakor Stadium as they advanced with a match to spare, as they added to the 1-0 win over Turkmenistan on Matchday One to assure themselves of top spot in Group A.

Uzbekistan made three changes to their starting lineup with Ulugbek Khoshimov, who scored the winning penalty against Turkmenistan on Matchday One, maintaining his position among the 11, but it was Jasurbek Jaloliddinov who stole the spotlight inside the opening four minutes.

The unmarked Uzbek captain raced down the pitch before letting loose a crackling strike from outside the box that deflected off the inside of the upright and into the net, leaving Qatar goalkeeper Salah Zakaria stunned and the home supporters wild at the Pakhtakor Stadium.

Boosted by the early goal, Ibrokhim Ibragimov and Dostonbek Tursunov also took their attempts from distance moments later, which were easily dealt by Zakaria, but the Al Duhail goalkeeper could not hold out against Hojimat Erkinov’s brilliance in the 20th minute.

The action began with Erkinov collecting Abubakir Ashurov’s long-range cross into the final third, and the Pakhtakor midfielder displayed his skill in dribbling past the Qatari defence before beating Zakaria with his strike from an acute angle.

Two could have turned to three in the 34th minute when Tursunov redirected Ibragimov’s cross to the near post for a sliding Khusain Norchaev to finish, but Qatar breathed a sigh of relief as the ball deflected off the upright.

Backed by a huge turnout at the Pakhtakor Stadium, Uzbekistan kept at it and eventually found their third in first half added time following a swift counter-attacking move, with an unstoppable Erkinov quickly picking himself up following a Yousef Ayman tackle to continue surging down the pitch before finding Norchaev, who had the simple task of tapping home to make it 3-0.

Qatar had a brighter start to the second half, but opportunities were few and far between, with their best chance coming in the 52nd minute when Yusuf Abdurisag got on the end of a series of passes in the box, but could only force a parry from goalkeeper Abduvakhid Nematov.

Norchaev and Khoshimov were a formidable pair, and the duo threatened at the hour-mark with Zakaria spilling Norchaev’s effort, with Khoshimov converting the loose ball with ease.

Norchaev was at the heart of the action again just three minutes later, this time forcing an error from Ayman to put Uzbekistan five goals up, before substitute Ruslanbek Jiyanov further punished Qatar with an incredible strike past Zakaria in the 67th minute.

Qatar have to defeat Turkmenistan on Tuesday to keep their hopes alive, while Uzbekistan face Islamic Republic of Iran, who also need a win after falling 2-1 to Turkmenistan earlier on Saturday.