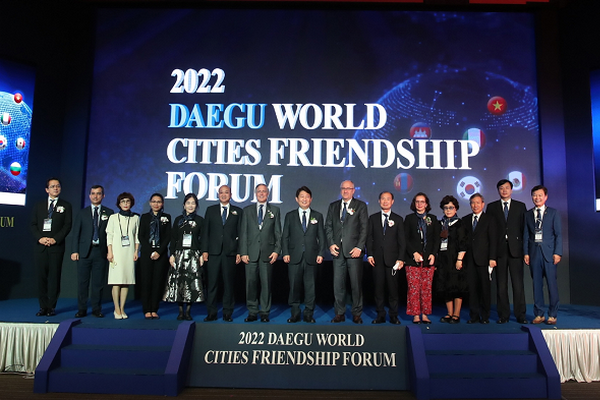 The event was attended by Mayor of Daegu Kwon Young-jin, heads and representatives of diplomatic missions accredited in the Republic of Korea, heads of twenty-six cities and provinces of foreign countries with which Daegu has established friendly relations.

During the forum, a comprehensive exchange of views took place on the prospects for expanding cooperation during the post-pandemic period between the city of Daegu and regions of foreign countries in trade, economic, cultural, humanitarian and other areas of mutual interest.

In his speech, Daegu Mayor Kwon Young-jin noted with satisfaction the progressive deepening of the special strategic partnership and multifaceted cooperation, as well as interregional ties between South Korea and Uzbekistan.

In particular, he noted that an unprecedented delegation of 76 people from among the representatives of the Ministry of Culture, the creative team of the State Academic Bolshoi Theater named after Alisher Navoi was on tour in the Republic of Korea from 25 to 31 March to hold concerts in major cities countries.

The mayor of the city especially emphasized the holding on 26 March 2022 of the first concert of the Bolshoi Theater artists at the Opera House of the city of Daegu, dedicated to the 30th anniversary of the establishment of diplomatic relations between Uzbekistan and the Republic of Korea.

Also, the attention of the participants was drawn to the successful organization at the beginning of this year at the Institute of the Silk Road and Central Asia at the University of Kemyon in Daegu, a festival of Uzbek culture showing Uzbek films, national music and dance numbers, as well as a round table dedicated to Uzbek culture and achievements. countries in various areas.

According to the head of the city of Daegu, these events will undoubtedly further expand cultural ties and deepen mutual understanding between the peoples of the two countries.

Counselor of the Embassy of our country in Seoul Zokir Saidov, in his speech at the forum, presented detailed information on the current state and promising areas for further deepening interregional cooperation between Uzbekistan and South Korea. An overview presentation of the rich tourism potential of the city of Bukhara took place.

Taking into account that Daegu has a huge potential and opportunities, an agreement was reached to accelerate the signing of a bilateral document on cooperation with the city of Bukhara, the development of which has already been completed by the parties.

Daegu has the status of a city of central subordination and is the fourth largest city in the Republic of Korea. Due to its favorable geographical position, Daegu has long been an important transport center in South Korea. The road connecting Seoul with the main trading port, Busan, also passed through it. The main branches of local production are mechanical engineering, metallurgy and the textile industry.

Within the framework of cooperation between the regions of the two countries, it is planned to organize direct tourist exchanges, implement joint programs and projects, including in the areas of light industry, engineering, drinking water purification, cultural and humanitarian sectors, healthcare and education, in order to support and promote trade and economic and investment cooperation.

Speaking about Uzbekistan, the Deputy Governor - Ambassador of International Relations of the city of Daegu Chin Ki Hong described the Bukhara region as a historical region that has an incredibly huge potential for tourism development. This, according to him, first of all, is shown in rare cultural relics that testify to the rich history of the city, and secondly, Bukhara is one of the important cities through which the Great Silk Road passed. “It is not the sun that illuminates the city of Bukhara, but Bukhara illuminates the sun,” he stressed.

Chin Ki Hoon also said that as part of the celebration of the 30th anniversary of the establishment of diplomatic relations between Uzbekistan and South Korea, a delegation from the city of Daegu plans to visit Uzbekistan in the fall of 2022.