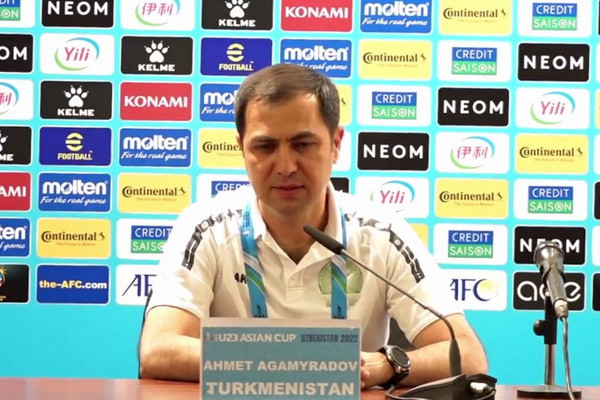 Tashkent, Uzbekistan (UzDaily.com) -- Matchwinner Ulugbek Khoshimov is relishing more victories with Uzbekistan after their hard-fought 1-0 victory over Turkmenistan in Group A of the AFC U23 Asian Cup™ Uzbekistan 2022 on Wednesday, the-afc.com reported.

Playing in front of a partisan crowd at the Tashkent Stadium, Uzbekistan were kept at bay for the better part of the game before substitute Khoshimov scored from the spot with 15 minutes remaining to seal the three points.

The victory means Uzbekistan have a two point advantage at the top of the standings over Qatar and Islamic Republic of Iran, who played to a 1-1 draw on Wednesday. The hosts play Qatar on Matchday Two.

Khoshimov was brought on for Otabek Jurakuziyev as a 63rd minute substitute and his impact was felt instantly as Uzbekistan stepped up a gear.

“We expected this to be a difficult match since the first match is always tougher than the rest,” said the Neftchi Fergana midfielder. “Although we won, we know we are capable of doing much better. I can’t say that we played badly but we will take a lesson from our performance and use it to get better results in the upcoming matches.

“Our goal is to always look forward. When my coach sent me on, he told me only one thing – ‘You have one job and that is to score’.  Thankfully, it made all the difference."

Following the morale-boosting win, the 21-year-old is looking forward to Uzbekistan’s match against Qatar on Saturday.

“The three points (against Turkmenistan) are extremely important to us. We are now looking forward to our encounters against Qatar and Iran and we’re confident of coming out victorious. Today’s win will play an integral role in lifting our morale. It will also motivate us to work harder to achieve better results.”

Head coach Timur Kapadze was pleased with his players’ performance after an energy-sapping first half against Turkmenistan.

“In football the opening game is always the hardest," said Kapadze. “I’m pleased with my players' performance. It was a hard-earned victory seeing that we had a short time to prepare ourselves. There were a lot of nerves ahead of this opening fixture, but we got the three points.”

While Turkmenistan held their own against an attacking Uzbekistan side, head coach Ahmet Agamyradov admitted his team lost to a superior side.

“I want to congratulate the opposing team for their victory today. It was well deserved,” said Agamyradov. “In football, the stronger team will win the match and today it was Uzbekistan. It’s unfortunate that we lost the game but I’m proud of my players.

“It’s the first time we are playing in the AFC U23 Asian Cup and to start off with a defeat is difficult for any team. My players tried everything in terms of tactics and different approaches in the second half but Uzbekistan were just too strong in the end."