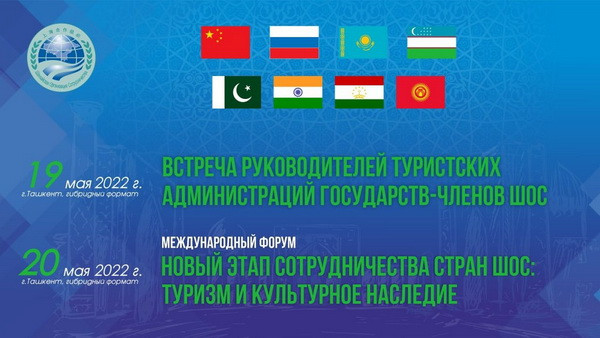 Tashkent, Uzbekistan (UzDaily.com) -- On 19-20 May 2022, the Hilton Tashkent City Hotel in a hybrid format hosted the international forum "A new stage of cooperation between the SCO countries: tourism and cultural heritage", timed to coincide with the Summit of the Heads of State of the Shanghai Cooperation Organization (SCO), which is to be held in the city of Samarkand on 15-16 September 2022.

The forum was attended by heads of tourism administrations of the SCO member states: India, Kazakhstan, China, Kyrgyzstan, Pakistan, Russia, Tajikistan, Uzbekistan, as well as international experts on tourism development and the preservation of cultural heritage, leaders and guests of honor, representatives of ministries and the media.

The main goals of the forum are the tasks of strengthening tourism cooperation, trust, friendship and good neighborliness between the Member States; development of trade and economic cooperation, strengthening of peace and security; maintenance and preservation of cultural and historical objects; promoting the tourism potential of the SCO member states.

At the meeting, Deputy Prime Minister, Minister of Tourism and Cultural Heritage of the Republic of Uzbekistan Aziz Abdukhakimov and SCO Secretary General Zhang Ming delivered a welcoming speech.

“Every year, an increasing number of states consider the development of the tourism industry as an important segment of the national economy and a strategic incentive for the growth of the state's competitiveness.Thanks to the active and comprehensive support of the country's leadership, the tourism market of Uzbekistan has widely opened its doors to receive international tourists. In a short period, the number of visa-free countries increased from 9 to 92 countries. Further development of tourism ties with the SCO countries is a priority area for us. The SCO space, covering 44% of the total population of our planet, is a huge tourism market, the potential of which has not been fully realized. So, in 2019, about 250 million tourists left the SCO countries for holidays abroad (India 27 million, China 155 million, Uzbekistan 1.7 million, Kazakhstan 206 thousand, Tajikistan 31 thousand, Russia 20 million). We must join forces and direct this flow, first of all, to the development of "internal tourism of the SCO," - said Aziz Abdukhakimov.

SCO Secretary-General Zhang Ming noted in an online format that today we are faced with the task of raising cooperation in the field of tourism in the SCO to a qualitatively new, higher level. There are all the necessary prerequisites and conditions for this. In this context, I want to emphasize the importance of constant and direct contacts between our departments for the implementation of the agreements and tasks set by the heads of our states to promote a multifaceted partnership within the SCO.

The heads of tourism administrations approved the draft "Agreements between the governments of the member states of the Shanghai Cooperation Organization on the development of cooperation in the field of tourism" and agreed to sign during the Summit.

Issues of cooperation, restoration and further development of the tourism sector in the post-pandemic period, the formation of a single SCO tourism brand and its promotion were discussed; creation of new combined tourist routes and optimization of existing destinations in terms of safe tourism; expansion of investment cooperation in the field of tourism, exchange of experience in the development of tourism infrastructure.

It should be noted that today the tourism industry of Uzbekistan has set serious tasks to accelerate the resumption of inbound tourism and increase domestic tourism to 10 million people.

For these purposes, the tourism business is provided with wide benefits. In particular, from July 1, entrepreneurs who have opened guest houses, food and trade outlets, entertainment facilities in tourist villages will pay turnover tax and social tax at a rate of 1% for 3 years, as well as only 1% of the accrued amount. property tax, land and water taxes.

Within the framework of family business programs, loans will be provided for the creation of guest houses, yurts and eco-houses, tent camps.

Measures have been identified for the construction along the Uzbek tourist highway, passing through 31 districts and cities, caravanserais with parking, camping, car service, catering and gas stations.

In addition, from September 1, a "cashback" system with a refund of 15% of the cost of air, rail and bus tickets, 20% of hotel accommodation, 50% of the cost of tickets to museums and other cultural objects.