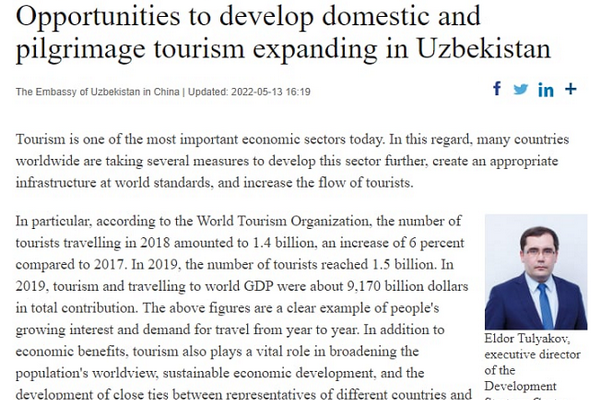 Tourism potential of Uzbekistan in the focus of Chinese media attention

Tourism potential of Uzbekistan in the focus of Chinese media attention

The article notes that Uzbekistan has great tourism potential. In 2016, as a result of a radical reform of the tourism sector, tourism infrastructure was developed in the country. The number of international tourists has grown from 2 million in 2016 to 6.7 million in 2019.

According to the Chinese edition, if in 2016-2021 the number of local tourists reached 24 million, then the number of foreigners amounted to almost 20 million people. Due to the coronavirus pandemic, 1.5 million foreign tourists visited Uzbekistan in 2020, and in 2021 their number reached 1.7 million.

Major tourism development projects are being implemented in each region of the country. A striking example of this is the Afsonalar Vodiysi complex in Namangan and the Amirsoy complex in Bostanlyk. Thousands of foreign and local tourists visit these complexes every day, the publication says.

“For the further development of the tourism sector, it is necessary, first of all, to improve the necessary infrastructure,” the newspaper notes. - If the first is transport, then the second is logistics. Currently, the government of Uzbekistan pays serious attention to the issues of reducing transport costs, effectively establishing the activities of low-cost airlines on international and local routes in order to meet the demand of tourists for air travel, and improving the mechanisms for purchasing tickets for modern high-speed trains.”

From 1 July, Uzbekistan will introduce discounts of up to 50 percent on services provided to foreign airlines under the Ziyorat Tourism program. Until 1 October, a new company, Silk avia, will be created, designed for local air transportation. In order to reduce costs, 9 aircraft have been fully upgraded to economy class, China Daily concludes.