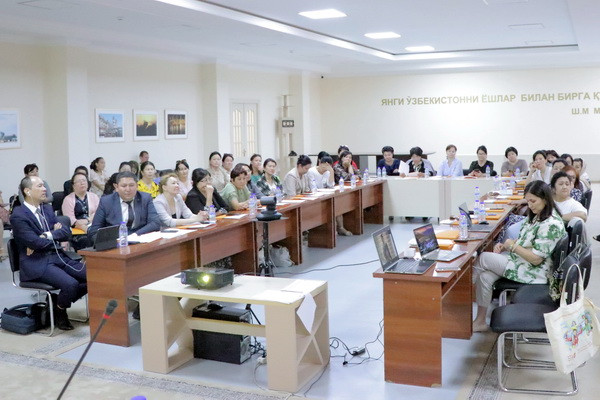 Tashkent, Uzbekistan (UzDaily.com) -- On 12 May 2022, an extended meeting of the participants of the working group of the Ministry of Health of the Republic of Uzbekistan was organized to coordinate the implementation of a pilot project on HPV testing for early detection of cervical cancer among women aged 30-55 years as part of a joint project “HPV Testing for Early Detection of Cervical Cancer”, UNDP-UNFPA Program “Improving the resilience of local communities to health, environmental and economic insecurity in the Aral Sea region”, conducted with the financial support of the Government of Japan.

During the meeting, members of the working group presented the results of monitoring the project, shared their experience in introducing thermal ablation in the treatment of precancerous diseases of the cervix as part of a pilot project of the cervical cancer screening program in Uzbekistan. Also, the difficulties and best experience of obstetrician-gynecologists in the examination, diagnosis and treatment of women in primary health care were noted.

It should be noted that the participants of the working meeting paid special attention to raising public awareness on cervical cancer screening and on the difficulties and experience of involving women in the project.

Summing up the meeting, the participants of the working group reported that during the joint work 49140 (98%) tests were performed, of which 3290 (6.7%) were positive for the presence of the virus in the body. All patients with identified pathology were referred for further consultations and treatment of narrow specialists. 759 (23%) tested women with HPV-positive status were referred to oncology, 9 women (1.2%) of women referred to oncology underwent surgical treatment of cervical cancer, 237 (31%) HPV-positive women with minimal lesions on the cervix underwent thermal ablation or radio wave coagulation in the clinic.

This project aims to detect cervical cancer at an early stage, when proper treatment can lead to a 100% cure for the patient. All results obtained during the implementation of the program will be transferred to the Ministry of Health of the Republic of Uzbekistan for the development of the National Strategy for the Prevention of Cancer, including cervical cancer.

Implementation and launch of the pilot project was a complex operation involving many activities, including: acquisition and delivery of new equipment; training health care workers to perform screening tests and triage women with positive screening results; monthly follow-up visits to assess progress and solve problems, etc.

Within the framework of the project, 45 gynecologists, 150 family doctors, 270 visiting nurses and 77 midwives of primary health care in the Republic of Karakalpakstan were trained to conduct HPV testing to determine the early stages of cervical changes among 50,000 women aged 30 to 55. The trainings were conducted by specialists of the Republican Scientific and Practical Specialized Center for Obstetrics and Gynecology of the Ministry of Health of the Republic of Uzbekistan.

In January 2021, as part of the project, equipment and a test system for detecting the human papillomavirus (HPV) were donated. In particular, 8 machines and 50,000 tests were installed in the district multidisciplinary polyclinics of the Republic of Karakalpakstan, purchased at the expense of the Japanese government. With the support of UNFPA, an additional 2 machines and 6,000 tests were purchased for screening tests in the city of Chirchik, as part of a joint pilot project with the World Health Organization on screening for cervical cancer in the Tashkent region.

In February 2022, UNFPA (United Nations Population Fund) donated 2 units of radio wave equipment to the Ministry of Health of the Republic of Karakalpakstan for the treatment of precancerous lesions at the primary level. With the help of the equipment transferred to the residents of the Republic of Karakalpakstan, doctors working at the primary health care level will be able to provide the necessary assistance in the treatment of neoplasms in women at an early stage, perform a biopsy of the cervix, diathermoelectrocoagulation for cervical hyperkeratosis and stop bleeding. Of particular note is the fact that women living in remote areas will no longer need to travel to oncology centers, but directly in polyclinics to receive the full range of services for the treatment of precancerous lesions.

Mr. Yu Yu, UNFPA Representative in Uzbekistan, noted that the pilot project on HPV testing for early detection of cervical cancer in the Republic of Uzbekistan is aimed at improving the level of medical services provided and strengthening the capacity of the primary level in the treatment of women with cervical diseases. In the future, it is expected that the result of the pilot project will be the development and implementation of a national organized screening program for cervical cancer. Screening programs can bring positive results, such as reducing the rate of new cases and mortality from cervical cancer by up to 80%.

Cervical cancer caused by the sexually transmitted human papillomavirus (HPV or HPV) continues to be a major public health problem worldwide. According to the World Health Organization, more than 300,000 women die from cervical cancer every year. In Uzbekistan, as well as worldwide, cervical cancer is the second most common cancer among women of all ages and the second most common cause of death among women of childbearing age (15-45 years) after breast cancer. In 2020, cervical cancer was responsible for 1,650 new cases and 1,000 deaths, but analysis of incidence and mortality rates over time shows that they are steadily increasing and are estimated to reach 10.15 and 6.46, respectively, by 2030, when cancer cervical cancer will cause 2,100 new cases and 1,300 deaths per year.

It is worth noting that the Ministry of Health of the Republic of Uzbekistan and UNFPA are actively cooperating within the framework of the signed document of understanding dated 06/05/2020 on strengthening the capacity of healthcare institutions in order to develop and implement a comprehensive reproductive health strategy and provide an integrated package of basic services, including maternal health and HIV prevention, with a focus on the rural population, as well as on the population of territories exposed to environmental disaster in Aral Sea region.