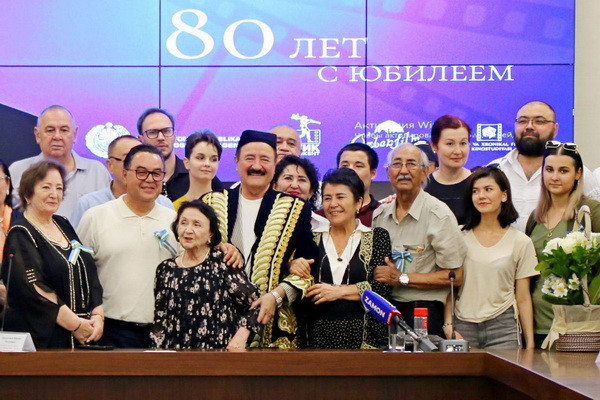 Presentation, anniversary and plans for the future

Presentation, anniversary and plans for the future

Tashkent, Uzbekistan (UzDaily.com) -- The House of Cinematographers hosted a presentation of projects that are being implemented in the format of co-production by filmmakers of Uzbekistan together with Belarusfilm, as well as a celebration of film director Elyor Ishmukhamedov in connection with his 80th birthday.

The results of cooperation between filmmakers of the two countries over the past three years were summed up. During this period, with the support of Belarusfilm, the films Meros by Khilol Nasimov, Ilhak by Jahongir Akhmedov, and Mukhabbat Bahori by Ibrohim Rasulov were made.

The parties also presented current projects at the meeting.

Last year, during the Listapad festival in Minsk, the leadership of the Cinematography Agency of Uzbekistan and Belarusfilm signed a memorandum on the launch of a new project - the film Asian Lion. This is a biographical drama about the Hero of the Soviet Union Mamadali Topvaldiev (partisan nickname - "Kazbek"), who was born in Ferghana region, and became a partisan scout, demolitionist in the war. The film will be directed by the young director Muhammadali Iskandarov, known for his film "I am not a terrorist."

Discussions took place on the filming of the film "Uzbek", which is being filmed by the Cinema Agency of Uzbekistan with the support of "Belarusfilm". The film is created on the basis of the collective image of the Uzbek sniper girl, the legendary Zebo Ganiyeva. The image of the heroine embodies the courage and resilience of the women of Uzbekistan who fought on the fronts of World War II.

Also at the meeting, it was announced the launch of new projects, including a film about the Belarusian poet Yakub Kolos, who lived and worked in Uzbekistan during the Second World War. The picture will be dedicated to the 140th anniversary of the writer.

Memorandums were signed on the discussed projects at the meeting.

- We have grandiose plans with the Cinema Agency of Uzbekistan, and I am sure that all of them will be implemented. Our cooperation is developing actively and rapidly, there are already several worthy films in the portfolio. I hope the pace will only pick up and we will make many more films together. We agreed to jointly create an animated and feature film for children based on Uzbek fairy tales, commented Vladimir Karachevsky, director of the film studio "Belarusfilm".

Also, within the framework of the evening, a solemn event was held dedicated to the 80th anniversary of the famous director, creator of such films as “Tenderness”, “Lovers” Elyor Ishmukhamedov.

At the event, filmmakers, including screenwriter Odelsha Agishev, director Ali Khamraev, Honored Artist of Uzbekistan Rustam Sagdullaev, director of the Tashkent branch of VGIK Eldor Yuldashev, as well as students of VGIK, congratulated Elyor Ishmukhamedov on his anniversary and wished him good health, happiness and new victories. The director was presented with memorable gifts from the leadership of the Cinema Agency.

Warmly congratulating the hero of the day, the Director General of the Cinematography Agency noted:

- We thank our meters Elyor Ishmukhamedov and Odelsha Agishev for responding and supporting the initiative of the President of Uzbekistan Shavkat Mirziyoyev to open the Tashkent branch of VGIK. And today, for more than half a year, you, being in Tashkent, have been giving your knowledge to our youth. We are confident that the days will come when your students, dear Elyor Mukhitdinovich, will create the same masterpieces of cinematography such as “Tenderness”, “Lovers”, said the Director General of the Agency Firdavs Abdukhalikov.