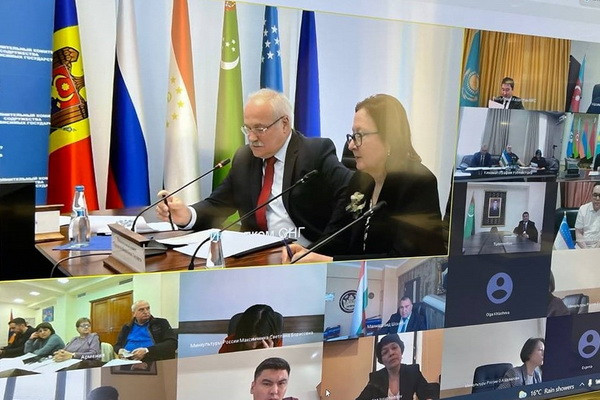 Tashkent, Uzbekistan (UzDaily.com) -- A working meeting of the heads of the largest film studios in Azerbaijan, Armenia, Belarus, Kazakhstan, Kyrgyzstan, Moldova, Russia, Tajikistan, Turkmenistan and Uzbekistan was held at the CIS Executive Committee.

The results of the joint work were summed up, as well as the prospects for mutual cooperation were announced.

– We welcome the initiative to unite cinematographers of the CIS countries and are ready to support projects aimed at further combining efforts in the film production of our countries. Preservation of the common humanitarian and cultural space remains one of the main priorities of cooperation between the member states of the Commonwealth, - said Alexei Sazonov, Director of the Department for Humanitarian Cooperation, General Political and Social Problems of the CIS Executive Committee, at the opening of the meeting.

The participants of the meeting - film studios - presented projects aimed at mutual cooperation. Thus, the delegation of Uzbekistan, headed by the Director General of the Cinematography Agency Firdavs Abdukhalikov, spoke about current projects in the format of co-production. These are projects with Azerbaijan - "Khoja Nasreddin", with Tajikistan - "Navoi and Jami" and "Invisible Star", with Russia - "Peri’s Gift", "Baron" and "The Taste of the Sun", and five documentaries, with Belarus - "Kazbek" and "Uzbek", with Kazakhstan - "Neighbors" and "Echelons go to the East" and "Korkut ota".

It was also emphasized that a number of co-produced documentaries, including on the topic of the cultural heritage of Uzbekistan, had already been released on the Russian TV channels Kultura, Mir and RTR.

At the meeting, the Cinematography Agency of Uzbekistan presented the results of the 13th Tashkent International Film Festival and announced plans for the 14th Festival, which will be held in September this year.

Taking into account the positive experience of holding such a large-scale event, the forum participants proposed to once again focus on the youth direction, which included master classes, pitching of youth film projects, as well as the “Cinema in 5 Days” program.

An initiative was also made to hold a film market of the CIS countries on the sidelines of the upcoming film festival, and the Days of World Cinema, which have already become traditional.

Representatives from 10 countries noted the high level of holding the Tashkent International Film Festival in 2021 and took it as an example of holding film events in the participating countries.

The Uzbek delegation also informed that the first Animation Film Festival is being held in Tashkent these days.

It should be noted that the animated film "Khoja Nasreddin", which is being created by Uzbekistan, Russia and Kazakhstan, is also being shot with Bazelevs. The memorandum on the creation of the cartoon was signed on the sidelines of the Tashkent International Film Festival.

- I again want to thank the Uzbek side for a large number of initiatives and for support in the implementation of our joint projects. Believe me, we really need such meetings and today they are developing into a practical plane. New Uzbekistan is an excellent example for other countries in the development of international cooperation in the film industry and the production of films in the format of co-production. We understand that this is a bright result of the ongoing Shavkat Mirziyoyev of reforms in the field of cinema, - Vladimir Karachevsky, General Director of Belarusfilm, commented on the result of the meeting.

The positive experience of cooperation between the Film Agency of Uzbekistan and the CIS countries, including in terms of organizing joint film production, was noted. General Director of "Tajikfilm" Mahmadsaid Shokhiyon said that joint projects have never moved forward so rapidly. “In a short time, we have already held a number of organizational meetings and negotiations, and now the combined team of screenwriters from our countries is already working on films.”

The meeting participants also presented their road maps for the next two years. Proposals were made for the further development of joint partnerships in the areas of film education, film production, festival movement, the exchange of banks of specialists and locations, the holding of international events, as well as the creation of a single centralized fund for the translation and dubbing of films participating in international festivals and film days.

Ideas were put forward on the release of golden collections of films from the CIS countries, which the participating countries will exchange for demonstration on their national TV channels. There were also initiatives to create a unified information base of specialists and exchange of experts, joint entry into the international film market and film festivals.