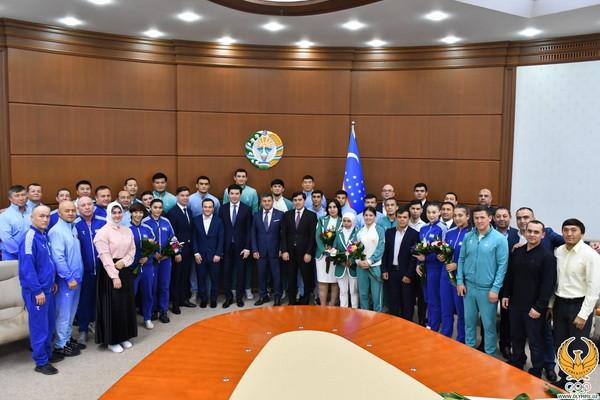 The solemn event was attended by representatives of the Ministry of Sports Development headed by Shakhrillo Makhmudov, the Secretary General of the NOC Oybek Kasimov, a responsible officer of the Administration of the President of the Republic of Uzbekistan Asilbek Murtazoev, athletes and coaches, as well as media representatives.

At the beginning of the meeting, officials noted that athletes constantly demonstrate their potential at the largest and most prestigious competitions, adequately defending the honor of the common Motherland called Uzbekistan in the international arena, and stressed that the achievements of athletes are highly appreciated by the Government. Of course, this gives them great strength for further success in conquering new heights on the world stage.

“We are glad that we have gathered today to celebrate the achievements of athletes at the world championships of the last sports season. The successes of our compatriots in the international arena were personally recognized and noted by the President. The state has always paid attention to the victories and achievements of athletes. There is no doubt that such awards give them even more motivation ahead of the upcoming Hangzhou 2022 Asian Games and other important tournaments. I hope that the representatives of Uzbekistan will worthily take part in the upcoming competitions and will continue to justify the trust placed in them,” said Shakhrillo Makhmudov.

In turn, Oybek Kasimov noted that there is no such awarding of athletes by the state in any country:

“We have a well-established tradition of rewarding athletes for their achievements at the World Championships throughout the year. It is gratifying that great attention is being paid to this by the Government. Elite athletes and coaches of the country gathered here. As a result of research, we have become witnesses to the fact that in no country there is a tradition to award prize-winning athletes after the Asian Games and World Championships. We wish you continued success and good luck."

Ivan Efremov at the London 2012 Olympics showed the fifth result in weightlifting in the weight category up to 105 kg. However, later, doping was discovered among the athletes who took first and fourth places. The International Olympic Committee redistributed the medals of the main starts of the four years of London 2012 in weightlifting, according to which, on the basis of the verdict of the disciplinary commission after the disqualification of weightlifters, the medal of the Ukrainian Olympic champion passed to the Iranian, silver to the athlete from Poland, and bronze to Ivan Yefremov.