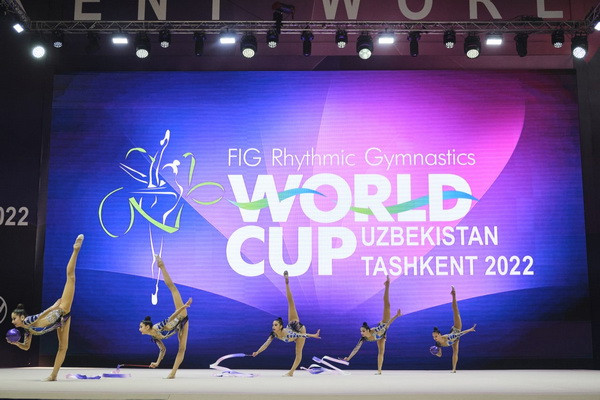 Tashkent, Uzbekistan (UzDaily.com) -- The next stage of the Rhythmic Gymnastics World Cup has ended Tashkent. The competitions, in which representatives of 15 countries took part, were successful for the national delegation of Uzbekistan.

The young Uzbek gymnast Takhmina Ikromova, initially climbed to the top step of the podium in the all-around, then won gold in the hoop and clubs exercises, as well as bronze in the ribbon exercise. Thus, Ikromova won 3 gold and 1 bronze medals at this tournament.

It is worth noting that the performance of the Uzbekistan team in the group exercise, recently formed for Paris 2024, gave all fans of Uzbek sports a lot of positive and unforgettable emotions.

Domestic gymnasts, trained under the guidance of Rano Mukhamedova and Nilufar Shomurodova, were first awarded the silver medal in the all-around, then the silver tide in the exercise with 5 hoops, and the first place in the program with 3 ribbons and 2 balls.

Thus, at these prestigious starts, the national team of Uzbekistan took first place in the team event with 4 gold, 2 silver and 1 bronze medals.