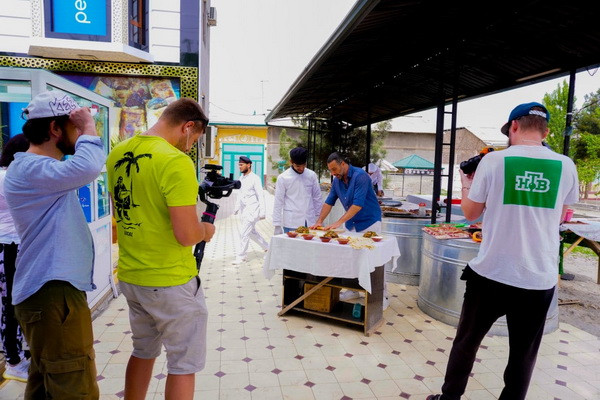 Tashkent, Uzbekistan (UzDaily.com) -- From 10 to 15 April 2022, a film crew of the NTV television project "Let’s go, let’s eat!" is visiting Uzbekistan for filming a new issue about the gastronomic potential of the Ferghana Valley. The visit was organized by the Ministry of Tourism and Cultural Heritage of the Republic of Uzbekistan.

On 10 April, at the airport in Namangan, the Russian film crew was met by representatives of the Ministry of Tourism and Cultural Heritage of Uzbekistan, Uzbekistan Airports JSC and the regional khokimiyat.

The film crew of the NTV channel visited the main attractions of Namangan - the Valley of Legends park and filmed objects that reveal the gastronomic potential of the Namangan region. The host of the TV project Federico Arnaldi was even able to participate and capture the process of preparing 20 types of samsa in the famous Somsa Markasi Center.

On 11 April, the film crew visited the house of the famous darboz Yunusali ota Goziev in the Markhamat district of Andijan region, where they got acquainted with the unique work of local rope walkers. On the same day, the film crew visited the ancient Devonaboy mosque, capturing local shrines for future frames of the TV project. And then she went to the Fergana region, the city of Kuva.

Today, on 12 April, the group filmed at the local shrine and hospital Bastom Buva, where they got acquainted with the unique methods of traditional medicine, visited the workshops of local artisans, as well as the Ramadan festive fair in Margilan.

The next destinations are the Artisans Center in Margilan, the sights of the city of Kokand - the famous palace of Khudoyarkhan, the cathedral mosque of Jome and the old dekhkan market.

At the end of the tour, the film crew will go to Tashkent to film the main sights and centers of national cuisine.