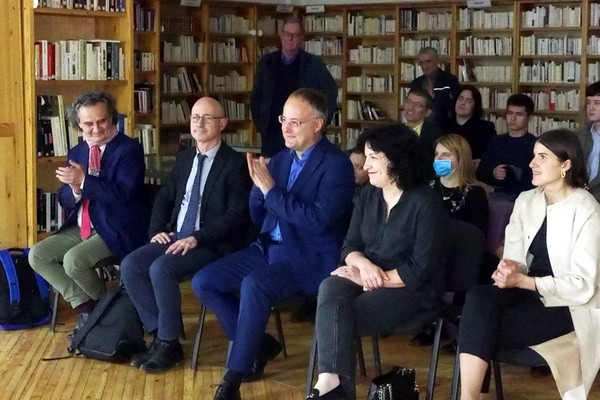 Presentation of the film "Untamed Romania" takes place in Tashkent

Presentation of the film "Untamed Romania" takes place in Tashkent

Tashkent, Uzbekistan (UzDaily.com) -- On 28 March 2022, the French Alliance in Tashkent hosted a screening of the documentary Untamed Romania.

The event was attended by representatives of the diplomatic corps accredited in Uzbekistan, public figures, youth and students.

This documentary film shows the stunning natural beauty of Romania at different times of the year. The film is directed by Tom Burton-Humphries.

In 2018, the film received the Golden Dolphin in Cannes in the nomination "Best film about nature, environment and ecology" at the international festival Corporate Media & TV Awards.

Opening the event, Romanian Ambassador to Uzbekistan Daniel Cristian Ciobanu noted that the screening of a documentary film about the magnificent nature of Romania is an important cultural event. He stressed that this event opens the Francophonie holiday in Tashkent (on 28-31 March 2022). The ambassador said that Romania pays special attention to the development of relations with Uzbekistan, including in the field of culture.

In January of this year, the Embassy of Romania in Tashkent and the National Library of Uzbekistan named after Alisher Navoi organized the exhibition "Romania's Contribution to the World Heritage". In February 2022, the Romanian Embassy in Uzbekistan and the Tashkent House of Photography held a photo exhibition together about the work of the great sculptor Constantin Brancusi. On 26 March 2022, the Embassy of Romania presented the national traditions of the holiday of welcoming spring "Martisor" at the British School in Tashkent.